Why didn’t Roger Ebert want games to be art?

There are so many different ways in which video games can be art that I can fill this article with screenshots of games that are all different sorts of art and still have space left over.

Roger Ebert was a brilliant man, a spectacular critic, and absolutely clueless when it came to video games.  He wrote a long-winded defense of why video games can never be art which was wrong when he wrote it, then he wrote more on the subject which was still wrong, and he went to his grave being wrong.  And it’s a shame that we lost him, and he was a great light, and his criticism helped shape my own critical voice, and had we met he would have had no idea why I did anything I did, because he thought video games weren’t art.

I’m not interested in opening that debate, though, because as far as I’m concerned it’s boring as hell.  Are video games art?  Yes.  We’re done.  No, what’s far more interesting is the question of why people would fight against that.  Why would you spend time and effort creating definitions that try to peg it as not art?  Why would you put so much energy into deflecting the possibility?  Why would anyone want to ensure that video games aren’t seen as art?

END_OF_DOCUMENT_TOKEN_TO_BE_REPLACED

The Commandments of Official Game Sites 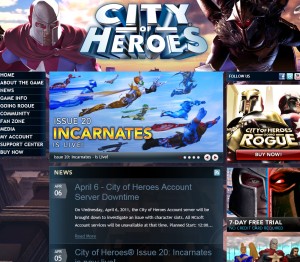 The front page of City of Heroes has remained fundamentally unchanged since the game launched seven years ago. There is no excuse for not getting this right.

After being forced to work with yet another site that doesn’t seem to work on a basic level, I’ve become convinced that MMO design teams actively hate people going to the game’s website.  Seriously, there are certain companies (I’m looking at you, Sony) whose sites could not be worse if they just took a photo of roadkill and posted it as an exclusive screenshot.

We all disagree about what makes the perfect game, sure, but I think there are pretty easy points to agree on for things that should be on every webpage.  Ten very simple commandments, you might call them.