I don’t like saying harsh things about an indie game.  Every single time I do so, I realize that I’m saying unkind things about something that someone worked hard to build, a labor of love – especially when it’s a title put together by a single person, which is quite the task.  I take no pleasure in it.  I don’t feel like it’s a fun opportunity to get digs in, not when it’s something a small group of people created out of nothing.

No amount of feeling bad makes Alter World a fun title to actually play, though, so it kind of has to take its lumps.  So you know what tone this piece is going to have.  It may be a reluctant piece of work, but this is a game that’s going on retail release for money, and that means that it gets critiqued as something asking you to spend money.  And the fact is that Alter World, labor of love or not, is doing something that lots of games have done before but isn’t actually fun to play.

END_OF_DOCUMENT_TOKEN_TO_BE_REPLACED 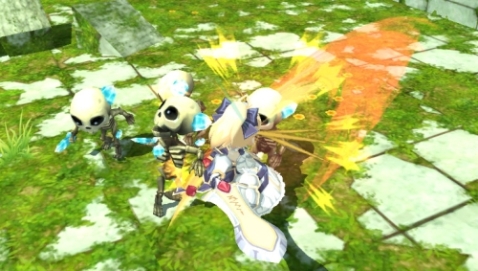 END_OF_DOCUMENT_TOKEN_TO_BE_REPLACED

Normally I don’t like name-dropping another game dozens of times while talking about a game, but… sometimes it’s necessary.

Anyone who has talked to me for a little while knows that I love Super Metroid.  And I genuinely love it, have loved it for years, will not and, I feel, should not stop loving it.  It’s a magnificent game, setting a standard for an entire genre that has frequently approached it and danced around what it accomplished without ever surpassing it – in a method that’s neither a disservice to the original nor a mark of shame for its numerous spiritual and literal successors.

Environmental Station Alpha is not Super Metroid.  I don’t know if it can be Super Metroid, for that matter; that’s a high bar to aim for.  What I do know is that I cannot in good conscience call it a bad game, but at the same time I can’t really say it’s a good one.  It understands the formula, but it never feels like it’s actually transcending that formula, just twisting a new riff on it with minimal inventiveness.

END_OF_DOCUMENT_TOKEN_TO_BE_REPLACED

I’m not the only one who thinks that this game has a title which sounds like a particularly advanced laxative, am I?

So.  Puzzle Quest.  You remember it, right?

It’s been several years since that title hit the market, but for such an odd little title you wouldn’t have expected it to spawn countless imitators.  Yet here we are, and here we are with another variant on the concept.  Starlaxis Supernova Edition is very much a game that owes a great deal to Puzzle Quest, but this time it’s trying to cross the slow burn of strategic gameplay with the puzzle-matching action you find in, well, puzzle games.

Does it work?  After playing the demo for half an hour, I’m not altogether sure.  Certainly it’s an interesting take, and certainly it’s not a bad game.  But unlike some of the more successful genre blends I’ve covered for this feature in the past, the combination is not more than the sum of its parts.  It’s just.. the sum of its parts, and while in some places that makes it a bit more engaging, in others it’s more off-putting.  I feel like the whole thing is a net zero, in other words.

END_OF_DOCUMENT_TOKEN_TO_BE_REPLACED

If anyone ever asks me to explain EVE Online again, I’m just going to lock them in a room where they have nothing to play other than this game. That should serve as an object lesson.

The problem with any sort of endless game is that you have to provide a reason why people are going to keep playing.  You need to offer something, well, unique.

It’d be unfair to say that Dollar Dash is a bad game.  As games go, it’s pretty well functional.  I might argue that it’s on the lower side of functional, but that’s not the point and it doesn’t really help or hurt the game on the balance.  The problem it has isn’t about whether or not it works.

No, the problem is that it’s a game with the barest form of a game beyond the expectation of having multiple players beating the snot out of one another on a regular basis.  Its single-player offering is perfunctory, there to train you and help you unlock things for the online experience, and that online experience is reliant on people deciding that they’d rather play this game as opposed to the countless entries doing the same thing, only better.  It’s surplus to requirements, and it offers little to compel the player to care.