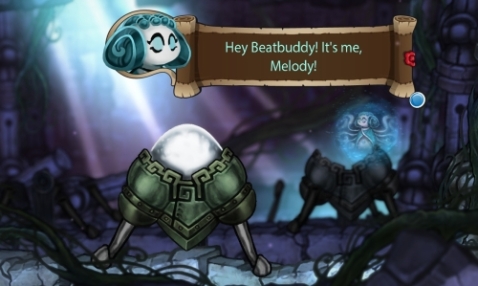 Are you? Is there a reason I was supposed to care about this? Were you going to tell me why I should care about it?

I’m not generally a fan of Steam’s recommendation setup simply because, well, it doesn’t work too well.  It picks out things that it thinks I’ll like, but it bases those recommendations upon elements that aren’t necessarily delivered with any panache.  Case in point: Beatbuddy: Tale of the Guardians.

Regular readers know that I’m a big fan of pairing music with gameplay.  When done correctly, it really marries rhythm to action, something that creates a different gameplay flow than you normally find.  So the idea of Beatbuddy, of having an action-adventure game that flows along with the beat, is very appealing to me.

Unfortunately, the game fails to deliver on that promise.  Beatbuddy has great music, great visuals, and even largely solid gameplay mechanics with a few downsides.  But not only does the music fail to flow along with the gameplay, in many cases the marriage between the two makes the game less fun and playable, rather than more.  Which seems pretty notably backward, all right.

END_OF_DOCUMENT_TOKEN_TO_BE_REPLACED

I fought a werewolf with nothing more than weaponized words. That’s what I did today.

Bookworm Adventures was always weird.  In a good way, mind – I think the weirdness of the very premise had a charming quality, albeit happily disconnecting from anything resembling reality by simply deciding that forming words deals damage and going from there.  It is, in many ways, the logical precursor to games like Puzzle Quest and Gyromancer, games with love for the RPG model but with an eye toward making the mechanics of fighting things a bit more unusual.

You cannot, however, call it the “logical precursor” to Letter Quest: Grimm’s Journey without being exceptionally generous with your use of that term, because it’s the same damn game.  Letter Quest, top to bottom, is so close to Bookworm Adventures that calling it even a spiritual sequel is a bit too gentle.  It’s the same core game with a slight facelift, a different look to it, and new challenges for you to clear through as you plod along through some story or another that’s not terribly well-defined and mostly exists so you can kill monsters with letter tiles.

That’s really not to its detriment, though.

END_OF_DOCUMENT_TOKEN_TO_BE_REPLACED

Demo Driver 8: Just Get Through

Assume everything on every map will kill you.

In the oldest days of video games, this is what it was all about.  We didn’t get an introduction to what we were doing.  There were no explanations.  If you were very lucky, there was an ending screen or two that tied everything that you had done into some sort of overarching narrative.  More often than not, though, what you had was games clearly from the same food group as Just Get Through, challenges without context.

This is made somewhat more forgivable when you consider that the game is a one-person effort, and even more so when you admit, however grudgingly, that the game does a more than halfway decent job of living up to the spirit of what made older games fun without being tied into nostalgia or the trappings of the games.  You start out by spawning in the middle of a cavern network with no real indications of what you should be doing, and no answers are forthcoming.  All you can do is try to find the next portal.  Or die along the road.

Eventually, you will die along the road.

END_OF_DOCUMENT_TOKEN_TO_BE_REPLACED

Back in the 90s, I was in a very famous teevee show.

One of the weird things about gaming is that there are these shadow genres which exist despite being almost totally ignored by the rest of the population.  The Horse Game is one of those genres.  There are tons of these games out there, and every single one of them smells like shovelware and, well, horse stables.  It’s all about training your horses, breeding them, carefully brushing them, and so forth.  And they are legion.  These games come out, they keep coming out, and presumably they are in fact making money.  How?  I don’t know!

I didn’t actually know that Secret of the Magic Crystals would fall into this genre until I clicked the name, but it does indeed.  It’s a game about raising not just normal boring horses, but special magical equine creatures like pegasi, unicorns, and if you get particularly lucky 90s sitcom stars.  (Not so much, really.)  And hey, maybe it was awesome!  I knew nothing about this genre, right?  Why not give it a shot?

END_OF_DOCUMENT_TOKEN_TO_BE_REPLACED

She looks so mildly out-of-sorts all the while.

I’m not sure if satisfaction or frustration dominated my playtime with Wings of Vi.  I’m not sure if I would want to play it again or not.  But I will say that the question isn’t as open-and-shut as I would have guessed from its description, so it gets points for that.

Much like last week’s entry, Wings of Vi is aiming at being a retro-style platformer, right down to evoking the feeling of brutality that you would get from 16-bit games at times.  As soon as I read that, images of platform hell and the sheer constant roadshow of everything everywhere trying to kill you danced into my head.  Add to that a buxom and rather lackadaisically dressed protagonist, and I was not hopeful.

Fortunately for my continued sanity, the game is most definitely not an entry into platform hell, despite the fact that its narrative concerns warring against a very literal hell.  Which alone gives me hope, because while the game aims at being hard – and one could argue about “too hard” here and there – it does so in a much more imaginative manner.