She looks so mildly out-of-sorts all the while.

I’m not sure if satisfaction or frustration dominated my playtime with Wings of Vi.  I’m not sure if I would want to play it again or not.  But I will say that the question isn’t as open-and-shut as I would have guessed from its description, so it gets points for that.

Much like last week’s entry, Wings of Vi is aiming at being a retro-style platformer, right down to evoking the feeling of brutality that you would get from 16-bit games at times.  As soon as I read that, images of platform hell and the sheer constant roadshow of everything everywhere trying to kill you danced into my head.  Add to that a buxom and rather lackadaisically dressed protagonist, and I was not hopeful.

Fortunately for my continued sanity, the game is most definitely not an entry into platform hell, despite the fact that its narrative concerns warring against a very literal hell.  Which alone gives me hope, because while the game aims at being hard – and one could argue about “too hard” here and there – it does so in a much more imaginative manner.

Platform hell, as a subgenre, is fundamentally based on kneecapping the player with no forewarning.  You make the best guesses you can with the information you have on hand, and then suddenly you find that a platform is actually a trap and it’ll fly up and kill you.  Wings of Vi engages in no such chicanery; it has infinite lives, I suspect you will in fact need every single one of them, and yet all of its challenges are in fact laid out clearly and predictably.  Should that make me like it more, or less?

The game’s story starts out in angel-town where all the angels live happy scantily-clad lives and the eponymous Vi gets woken up by her friend Rubi to go taunt the imprisoned lord of demons.  You can probably guess what happens next, and within the span of a minute or so Vi is tasked with clearing out the invasion of demonic forces, rescuing Rubi, and beating the snot out of the demon lord so that everything goes back to normal. 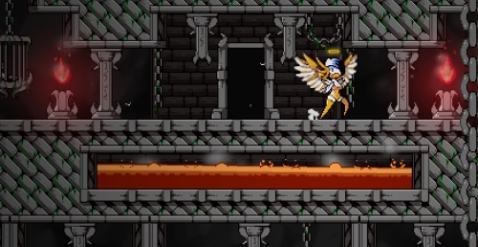 Vi’s jump has a unique arc to it, and it’s one of those games where cutting off part of the arc means that she drops like a stone.  Her one saving grace is that she can jump from midair, although in practice that means falling and timing your jump to lift you at just the right moment.  She has a life bar, but it’s vanishingly short, enemies move quickly, and it’s often difficult to dodge in just the right way before one of them whittles off the last chunk of your health…

Difficult, but not impossible.  Once I realized what the game’s checkpoints looked like, life became a bit easier, but it’s still gameplay based on trying, dying, and trying again.  You’ve even got a button right on your controller to die and respawn rather than wait for the inevitable.  Or after you have died, as there’s no traditional game over screen.  There isn’t even a traditional pause screen, which I learned to my dismay when I believed I had paused only to find that I was getting my face eaten by one of the flying little demon-dealies.

That part, at least, did feel a little unfair.  And it’s one of the places where I feel that the game is trying just a bit too hard to be difficult and not hard enough to be fun.  There are a distressing number of situations wherein the game expects you to guess at its mechanics or what you’re supposed to do next with no indications, and while the structure of the game lets you fling yourself at a problem over and over until you get it, without any pointers you have to just hope you stumble upon it.

All of this would be the bad.  It’s the sort of game that can easily start moving into frustration territory, and the lack of pointers isn’t so much infuriating as it is annoying.  It would be very easy to outright hate it and just label it as bad, not to mention the fact that the cast made up almost entirely of buxom angelic ladies doesn’t exactly speak volumes about its overall maturity.

Despite all of this, I couldn’t actually hate it.  I wouldn’t say that I was having a grand old time, but there was enough there to like that outweighed the stuff I found frustrating or dumb.  For one thing, while the most puzzle-ish segments smacked heavily of “figure this out or die,” when you do figure them out, it feels satisfying.  There’s a cadence to the game, and while it never slows down in its efforts to kill you, there are many spaces where you can take a breather and consider your next move.

The game also features a fair amount of replay value and unlockable widgets, including various outfits and accessories that you can toss on Vi.  None of that changes the fact that she is still Buxom Angel Lady, but it speaks to a solid level of customization, which I can appreciate.  Especially once you’re replaying the game after a few go-rounds and legitimately know how to take care of the various obstacles in your path.  The guessing game may not be as fun, but the fact that you can learn to work around it has more than a little merit.

So where do I stand?  It’s a mixed bag.  But if you’re looking for a genuinely challenging platformer, I feel comfortable recommending it.  I wouldn’t say it’s one of the best games I’ve played, but the parts of it that work do so with great gusto, and it manages to mix challenge in without coming across as cheap or arbitrary.  I don’t know if I’ll go back to it, but it makes more of a case for doing so than I would have expected.