An Open Letter to Electronic Arts

Maybe the ad campaign could employ a variant of the Citadel discount speech from the second game. “I’m Commander Shepard, and I purchase all of the games starring myself via the official Electronic Arts distribution service.”

Hey, guys!  So I hear tell you want to kill Steam.

Well, okay, that’s overly harsh; you just want a sweet piece of that digital distribution pie.  And who can blame you?  There’s a lot of money going through Steam, and if I were a big company I’d be looking for a way to pick up a few extra bucks down that road.  You’ve made a good opening move by cutting ties with Steam and putting both Star Wars: The Old Republic and Mass Effect 3 exclusively on Origin.  It’s really a good start toward getting a foot in the digital distribution market, and considering how much I like having some healthy competition here, I’m all in favor of it.

END_OF_DOCUMENT_TOKEN_TO_BE_REPLACED

Under the Alien Dome with Number Fourteen 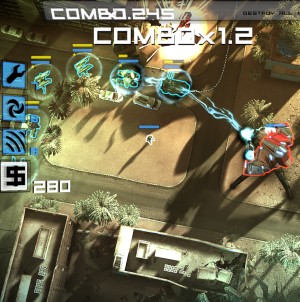 It’s really hard to get a screenshot from the game that’s not either staggeringly busy or just plain boring.

I might not always like Valve all that much, but I do adore Steam.  There’s stuff you can find there that you’d never find through any other route.  Case in point: Anomaly: Warzone Earth.

Tower defense games are one of my longstanding loves, and I’ve burnt away many an hour trying to set up the perfect maze of destructive towers for critters to march along.  So when some random Steam-clicking sent me along to Anomaly, I immediately checked to see if there was a demo available.  The game is the sort of thing that could backfire horribly, after all – a tower defense game in which you play the part of the oncoming hordes rather than building towers in your defense.  And while that could be a neat inversion, it could also be a game that takes away one of the core bits of fun that make up a good tower defense romp.