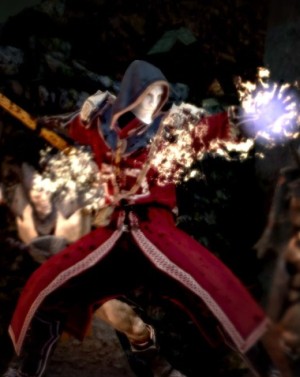 I would really have liked to include a screenshot of the upcoming DAII DLC, but we don’t know what that looks like yet, so have a mage in a Guy Fawkes mask.

In the beginning, the designers didn’t know what they had.  Well, okay, they knew what they had: a game that you played with a computer.  They just weren’t sure what to do with it.

Pong wasn’t really the first video game, nor was it the first one to answer the question of “how do we make money off of this?”  It was just the first one to do so in a successful fashion.  You fed the game a coin, you got to play.  When one of the two sides reached a predetermined score, the match was over, and if you wanted to play again you had to feed the machine another quarter.

As time went on, arcade game manufacturers realized a simple law – the more coins people had to feed into the machine to keep playing, the more money the game made.  This resulted in the early era of video game brutality.  Consoles were still expensive and not terribly popular, but everyone enjoyed an arcade cabinet.  And if you made those cabinets difficult, players would keep feeding the machine money in the hopes that a few more quarters would open the elusive road to victory.  Home games, as a result, were as brutal as the cabinets.  They people designing one were designing the other, and the home consoles didn’t have the following that the cabinets had.  Games were generally short, but brutally difficult, requiring a lot of play in order for players to advance past a certain point.

But there was a break-even point.  There was a certain degree of difficulty past which people would just start marching away from the game rather than keep hammering at it to try and beat the damn thing.  So there was the balance up until the Nintendo’s twilight years and the launch of the Super Nintendo.  Games had to be hard enough that players had to keep paying at regular intervals, but not so hard that they stopped thinking victory was just another quarter away.

By the time of the SNES, things had changed.  The arcades were no longer the dominant force in gaming, with consoles (and to a lesser extent home computers) having a very different audience.  Here, a trend in the other direction started.  Once a player had purchased the game, after all, there was no further investment to be had – it didn’t matter if the game was played to death or if it just sat unused in a shoebox.  But a happy player of Game A would buy Game B if he remembered the company responsible for Game A.  There was no incentive to make games harder, but there was a distinct incentive to make games more accessible and faster to complete.

Speed was still a virtue, but for the opposite reason.  Before, you could get away with having a game that had only seven levels, because it would take a whole lot of money to take the second.  Now, it was best if you could get someone to drop full retail price for a new game that could be beaten in a week, because that meant the player was coming back for a new game in the near future.

That trend started to see a hiccup only as the Playstation became more popular, where a five-disc epic cost the same amount at retail as a one-disc game that was over in half an hour.  People trended toward larger games, the sort of thing that looked like it would give more bang for a buck.  Hours of play were valued over challenge.  Unfortunately, this design trend came with a negative side effect – players wanted larger games that would be played for more time, which meant fewer purchases.  So the games tended to get another layer of ease layered on and tricks slipped in to ensure that players wouldn’t keep replaying the same game time after time.  After you’ve beaten Xenogears once, there’s not much point to playing again beyond a love of the game.

This is where DLC comes from.  It’s the only logical response to a world in which players want longer games that they’ll get lost in for several days or weeks at a stretch.  If the designers can’t sell you more games in close succession, they can sell you more of the game to keep a steady stream of cash coming out.  And after the game has made its money, they can always release a special edition that compiles all the DLC and gets another little sales spike from players who passed on the initial launch.

A point?  If there is one, it would come down to this.  DLC, free-to-play games, cash shops in pay-to-play games, all of that?  You created this, because this is what you said you wanted.  If you need to look to a villain for the ways in which games are monetized now, you can start and stop in the bathroom mirror.