If you know me, you know that I’m a pet person.  To be very specific, I’m a cat person most of the time, but I’ve got a deep and abiding affection for animals of all sorts.  Having pets is a big deal to me, and I don’t feel nearly as happy without a few of them in my home.  Which says something about me right off the bat, just like the fact that I have two cats mewing their way through my home says something different about me than if I had two dogs or two birds or two ferrets.

Pets are one of those character traits that we don’t tend to think about when it comes to roleplaying.  It’s kind of understandable why; we dote on our pets in real life, but unless you have a particularly unusual one we don’t really focus on our critters.  But a pet says a lot about you as a person, and there’s every reason why your character’s pets or lack thereof can be a major character element.

For the last time, I am not your pet, I am riding on a goobbue. It is different.

Fitting in a pet

It’s entirely possible that your character doesn’t have any pets, of course.  Lots of people don’t.  But even the lack of pets makes for a rather significant statement, that statement being “animals are not a high enough priority for me to deform my life in any fashion.”  Which is perfectly fine, of course, but it’s not necessarily the default.

Pets do, however, deform your life, even if it’s just in subtle ways.  Suddenly you have to make sure that these animals are fed if you’re not going to be around.  You need them to have space to stay, beds, toys, ways to make sure that they don’t fill your home with fecal matter and urine.  You need to keep a close watch on their health.  It’s like being responsible for a child, but without the eventual promise that the pet will grow up and won’t need your care any longer.  Your cat can’t care for itself when it gets old enough; by the time most human children are old enough to handle themselves, cats are entering their twilight years.

Obligations are usually not high on the list of things which roleplaying characters account for.  Adding a pet means adding a very human and very understandable obligation to your character’s life.  In many ways, it makes your character a bit easier to understand precisely because of that, because…

Your pet says a lot about you

There’s a reason why we talk about cat people and dog people.  If you want an animal that’s always happy to cuddle up to you, will come when you call, and can generally be schlepped outside without a whole lot of extra preparation, a dog is far and away the better choice.  Cats are more aloof, more distant, and in many ways more self-sufficient.  Cat owners don’t want their cats to come on demand, but prefer an animal that’s comfortable coexisting even if it’s not always right there.

There’s more to it than that, though.  I have two cats, both of whom are rescued animals, one adopted from an animal shelter and the other adopted from a nurse at our local veterinarian who was caring for abandoned kittens.  That says something very different than if I owned two show-perfect cats from specific and expensive breeds.  It also says something different than if I had two cats which I bought from a pet store, or if I had two cats from a litter of five courtesy of my older cat.  Or if I had two cats that just wandered in one day and didn’t leave.

Hell, their names say a lot.  Tali and Garrus are named after characters from Mass Effect.  I knew someone whose cats were named Black Kitty and Gray Kitty.  Some people name their cats after mythological figures, some name them after shows, some even just name them after arbitrary traits.  Names say a lot about the pets themselves, but they also say a lot about the person who named the animal.

Most games don’t limit you to the rather prosaic choices of cats and dogs, but the lessons still hold together.  My main character in Final Fantasy XIV has a pet morbol named Jafar; that says right there that she’s someone who enjoys unusual pets, perhaps even slightly unsettling ones.  It implies there’s more of a story there without being overt.  And it also serves as a useful character trait, since… 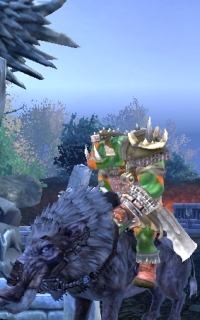 His name is Curlytail Von Hoofyparts and he’s the best friend an ork could want.

Pets help you learn about your character

There are lot of variants on what character is.  Character is who you are in the dark, character is shown by how you treat those who can offer nothing to help you, character is what you admit in the mirror.  Me?  I think you can learn a lot about someone by how they interact with their pets.

I don’t mean that in the obvious sense that if you’re kicking your dog you’re not a nice person.  I mean that in the sense that you have a relationship with your pets that’s relatively free of artifice.  Your pets don’t really judge you no matter what you do.  How you treat them and interact with them gives a reasonably clear picture about how you’ll act completely on your own.  Do you dote on them?  Welcome them?  Leave them to their own devices?  Sing to them, give them nicknames, yell at them when they misbehave, punish them, pamper them?

This can end up saying a lot about your character.  I played a Hunter in World of Warcraft who didn’t have names for any of his pets, because as far as he was concerned they were just tools.  Naming a wolf that was only there to gnaw and distract his enemies would be like naming a screwdriver.  Even if he treated his pets well (and he did) it was for simple utility’s sake, like being gentle to a car so it will run longer.  At best he might manage to respect his animals, but far more likely he would just consider them something with a function.

Meanwhile, in real life I come up with elaborate nicknames for my cats and sing to them, despite the fact that they have never tanked anything for me.

Feedback, like always, is welcome in the comments below or via mail to expostninja at gmail dot com.  Next week, I want to talk about roleplaying in hostile environments.  The week after that, based upon a comment from last week’s column, I want to talk in more depth about politeness for non-roleplayers.

One response to “Telling Stories: Roleplaying and character pets”