Should Bravely Default be a Final Fantasy game?

In most fantasy RPGs, having amnesia is like one better than having an iPod.

There used to be a really clear distinction.  Games were called Final Fantasy when they were part of a huge long series of games, each of which consisted of the same two words followed by a number.  You can argue the point a little, sure – Mystic Quest exists, the first Seiken Densetsu game was marketed as a Final Fantasy gaiden – but by and large this was the abnormality.  But now we’re deep into sequels and prequels and spinoffs that are, just the same, branded as part of Final Fantasy.  The reason Final Fantasy Dimensions is called that instead of, well, Final Fantasy (previous installment +1) is pretty much arbitrary.

Should it be?  That takes some talking.

The game is dramatically improved by the presence of Edea, but what game wouldn’t me?

It’s not a secret that there’s a certain vocal portion of the fanbase that’s unhappy with the past several installments of the Final Fantasy franchise.  The last game in the main series that played anything like Bravely Default was Final Fantasy IX, released about fourteen years ago.  Since then, games have moved further and further afield of that core concept of overworld map with various hotspots, a design methodology that worked wonders for a very long time.  Yes, the PlayStation-era games looked prettier, but at their core they were still very visibly inheritors of the exact same legacy that Final Fantasy started up in the first place.

Bravely Default, definitely, feels familiar in that respect.  Gone are things like sphere grids or license boards or whatever the heck Final Fantasy XIII‘s leveling mechanic was supposed to represent.  We’re no longer deprived of things like a world map.  It’s a solid, turn-based affair in the oldest school.  There’s not even fussing about with turn orders like we saw with Final Fantasy X; you input your side’s commands, people go in order of speed, everything resets, we’re good.  Poison is back to damaging you if you don’t clear it off at the end of the fight.

I like Bravely Default.  I like it a lot.  And I can totally understand why people want to see it with that Final Fantasy tag on it.

I mean, the game seems to be begging for it, doesn’t it?  You’ve got all of the classic classes.  Sure, the game’s take on how some classes look is a bit out there, but it’s drawing from the same well of inspiration that the games have been using for years when it comes to things like White Mages and Black Mages.  Wouldn’t it be a lot better if they could use the same classic summons instead of making up new ones, and if the game could use the same class looks that have been getting trotted out with slight alterations since 1982 or so?

First of all, it could have.  It totally could have used that without a problem.  The game is published by Square-Enix, it could have been as invested or not invested in the Final Fantasy franchise as the developers wanted.  Their last game was part of that august continuum, even.  Saying the game should be a Final Fantasy title is ignoring a rather important point of discussion – the people making the game obviously didn’t want it to be.  But why?

The official word is that Square retitled the game specifically to establish it as a new IP, because the game is very consciously evoking an older style of gameplay.  This is important, for two main reasons, the first being this is the only way we’re getting forward progress.

Let’s face it, the Final Fantasy series has been an incestuous circle of references for a long time now.  Black Mages, Summoners, Monks – these are jobs that have shown up time and again and have a very established and accepted look.  The new games look to draw upon the older games for inspiration and reference, leaving us in the uncomfortable position of having a series constantly mining its own past for new inspiration.  Mercifully, that hasn’t resulted in creative bankruptcy yet, but the vein of resources afforded by past innovations can’t be tapped forever without a reinvention every so often.

No, Kingdom Hearts doesn’t count here; the whole point of that franchise is remixing the familiar.  A game like Bravely Default can go further afield in some ways, providing concepts that can in turn be abducted again for future Final Fantasy games in terms of names and sources of inspiration.

Less so for gameplay, but in gameplay terms Final Fantasy doesn’t want to go back to what Bravely Default is.  Because that’s where the franchise started, and it’s also the point that the franchise as a whole is trying to move beyond.

The main series has never been about re-doing what worked before.  Final Fantasy II dropped in an entirely new system for the game, one that was radically unlike its predecessor.  The third game introduced the job system, the fourth played around with party sizes and narrative focus, the fifth marked a major evolution to the idea of jobs acting not as distinct entities but as collections of abilities, and the sixth re-introduced a narrative focus that was larger and grander than anything done before.  By the time Final Fantasy X rolled around the game did away with the entire structure of an overworld divided into smaller locations, trying to create the impression of a more connected world all around. 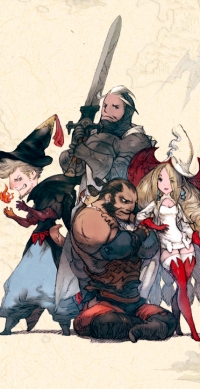 Now if you guys had been around when I was creating my group for FF1, that would have been great.

Obviously, if you signed on for this ride back when the overworld map was a happening thing, it feels really weird.  The conceptual gulf between Final Fantasy XIII and Bravely Default is pretty wide.  But that main series tag indicates that the game is trying to create new paradigms, not adhere to old ones.  Think about how many games came along that offered you a cast of characters with defined abilities battling it out in turn-based combat… and then remember that there was only one game in the main franchise that used that setup.  Every other title has used something more elaborate, different in some ways, trying something a little more novel.

By contrast, Bravely Default feels dated.  I love the game, but it feels like a slog through old familiar territory of heading back to the overworld, then into the dungeon… out of the dungeon, to a town, to the next dungeon… dungeon, town, dungeon, town, and every so often it’s dungeon followed by another dungeon just to mix things up.  If I sound a touch tired, it’s because I am.  I have seen all of this before, and it’s executed well but it’s also the same old song and dance.  It’s been done, and done well, by many people before now.

What Bravely Default is selling itself on is the power of nostalgia.  What Final Fantasy sells itself on is some form of novelty coupled with the heady scent of nostalgia, not the actual thing.  Its nostalgia is a gateway drug, meant to ease you into the concept of doing something you’ve never done before.  Yes, your summon is now a character-specific improvement minigame with an alternate mode like a Transformer, but look, it’s Odin!  You like Odin, yes?  Start learning about swapping Paradigms.  It’s a far cry from giving you the same basic game with a fresh look, the same core experience with slight tweaks to the formula.

In a just world, Bravely Default would still not be a Final Fantasy title.  It adheres to a firm mold, tweaking slight elements of the formula self-consciously but not attempting to be something notably different from its predecessors.  And it does so quite well.  But enjoying it should not be tied to whether or not it has the same two words in front of its title or not.  If you find you prefer Bravely Default to the Final Fantasy franchise at the moment, that’s fine also.  Wait a few years; there’s more stuff coming along, and maybe those reinventions will grab you a bit more.