Your guess is as good as mine right now.

Sometimes you get a very clear picture of a game from a demo because the demo is well-constructed, offers you enough of the game to know what it’s on about, and leaves you wanting more.  Honestly, most of the demos I’ve reviewed here have accomplished that goal rather nicely.  I’ve no desire whatsoever to play RACE 07, but I have a reasonably clear picture of what the game is from the demo and feel as if everything it wanted to accomplish was laid out clearly.

Sometimes, though, the demo – and possibly the entire game – is a confused mess that gives you such a top-level overview that you’re not sure what in the world is going on, let alone how the game is supposed to tie into anything or be relevant.  And that, I’m sorry to say, is what I was left with after my brief time in the Pyroblazer demo.  The whole thing comes across as a big blending of various elements without further explanation, and by the time I was done I was just plain tired. 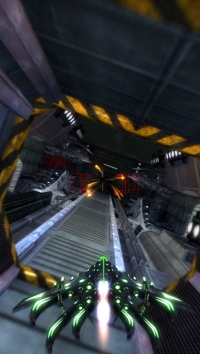 Winding your way through a tube. Exciting and dynamic in the early 90s, I guess.

Perhaps it’s just me.  Here, let me give you the plot overview as established in the opening cinematic: once, everything was peachy-keen on the planet, and everyone worshipped the Ethereal Flame.  Then a big planet-wide catastrophe happened, and now three major cities have been rebuilt.  The people seek to regain the favor of the Gods or destroy them, presumably getting the flame back or something via that route.  What sort of game do you think this is going to be?

If you said “halfway to a Wipeout clone,” then… um… really?  I don’t get how driving around really fast is supposed to somehow fix the situation we have set up in the opening cutscene.  Perhaps the explanation lies in the Pyropedia in the main menu, a big old dictionary with information on the various stuff you find in the game, but I’m generally of the mind that if you have to explain how your game’s premise ties into the game’s actual gameplay through an in-game encyclopedia you may have missed vital steps along the way.

I may make fun of games occasionally for choosing cliché plots, but at least they tie together with the style of game on display.

Still, that’s hardly enough to make me give up on a game; a disjointed mess of a plot doesn’t necessarily mean a disjointed mess of an actual game.  Pyroblazer is meant as a racer very much in the vein of Wipeout, as I mentioned – futuristic craft flying through the air and along the ground, shooting at one another whilst making graceful arcs at high speeds.  Lord knows that the original Playstation implanted within all of us a deep need to see this sort of thing happen.  And Wipeout really did establish itself as a very different creature, neither as weapon-focused as kart racers nor as racing-focused as games like Gran Turismo.

By contrast, at least from the demo, Pyroblazer does not do that.  Either part.  It winds up blending both sides badly and leaving us with a disjointed mess of a game instead of just a messy excuse plot.

The controls are fairly simple to figure out.  Left click fires your primary weapon, right click fires your secondary.  W for forward, S for reverse, A and D to rotate, mouse to steer.  Seems solid, yes?  A good control scheme for cutting through winding corridors, walking your weapons fire along the wall until you intersect with your opponent and… wait, there’s a lock-on?  An automatic one?

This is ground control to Major Tom
You’re really out in space
And the papers want to know which way you’ll go
Maybe if you had a minimap you’d know!

Yes, it appears that your front-facing weapon just locks on to the target in front of you, and as near as I could tell nothing but nothing could break that target lock.  The result is that there’s no real choice to be made here – hold down the fire button while someone is in front of you until they blow up, drop as many mines along the way as you can.  Instead of pitching hither and yon in an effort to line up a shot, you just shoot over and over and then you win.  The flip side is that if you’re in front of someone, there’s nothing to keep them from shooting you, no advantage to jinking about and making yourself a more difficult target.

Not that there’s a lot of technical racing on display either.  I played around with two different ships, and both seemed to reach top speed more or less instantly while losing basically no speed from scraping against the sides of the track.  Theoretically rolling could make certain areas easier to navigate, but quite frankly I rarely bothered and didn’t find a need for it.  In fact, the formula for success seemed quite straightforward.  Push to maximum acceleration, drop mines as they were available, shoot anyone in front of you and hope no one is shooting at you from behind.  Enjoy your first-place finish.

More distressingly, the courses on display (three of them in the demo) seem to have inherited the worst traits of games like this.  It’s not altogether clear where a course begins or ends, whether you’re turning down an alternate route or going the wrong way, what the alternate routes even offer.  Pickups aplenty line the courses, and I could not tell you what most of them are used for, although I can speculate.  There’s no sense of a clear route that would tie the entire environment together, nothing but vague passages through some rather rudimentary landscapes.

It’s possible that the full game has some sort of campaign mode that ties this all together.  Maybe if you play it long enough the whole thing starts to feel very contained.  But as it stands, the game is neither a good technical racer nor a good kart-style game, and its mechanics don’t even lead to a feeling of joy at the combat portions of the game.  Not to mention that the AI seems to be rock-stupid; I didn’t lose a race, didn’t even manage to fall below second place no matter what I tweaked on the settings.

So this is either a really bad demo or a very accurate demo for a very lackluster game.  Either way, I’d recommend passing.  Not because it’s not to my tastes, but because there seems to be very little on display here that other games don’t do and do better.  The whole thing is a disjointed mess from start to finish, and if the full version is better, it’ll be better without me ever knowing.