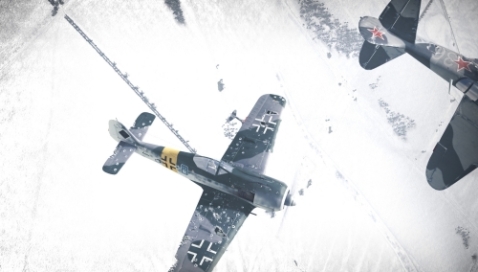 Going out in a blaze of glory, mostly because your plane is on fire.

I swear by all that is holy, if I never see another game based upon World War II, it will be far too soon.

Honestly, I am relatively certain that we are never going to need another game which involves more skirmishes against the Third Reich.  We are full up on anything that involves fighting Hitler’s forces in any theater of engagement.  So my opinions on Wings of Prey has two strikes against it right from the start.  It’s Yet Another World War II Game, something we have not needed since 2001 or so, and it’s a dogfighting simulator, which isn’t something I really care for.

So there was never going to be an ending wherein Wings of Prey and I ride off happily into the sunset, holding hands and smelling the flowers.  The best I could hope for was that the game would turn out to be better than my lackluster expectations, and to its credit, it succeeds at that.  I don’t know if that makes me really like it all that much, but sure does give me some food for thought.

By now you’ve likely sussed out the heart of te game, but let me spell it out: Wings of Prey puts you in control of Allied aircraft from World War II and then tosses you up against a variety of Axis aircraft in several loose recreations of famous battles.  Loose if you want them to be, anyhow; the game helpfully offers a number of sliders which I find quite charming.  If you want to focus on the simulation aspect and carefully manage your plane during takeoff and landing, you can do that.  Want to bypass all of that and just go with the arcade approach?  That’s cool too.

Having said that, the game’s efforts to cater to both sides of the fence wind up with concessions being made in both directions.  Whether or not those are good things depend greatly on what your personal tastes are.  Personally, I’d prefer my games to be a bit more arcade-heavy, but I’m not a big dogfighting fan period, so I’m happy to put my thoughts to one side entirely.  The controls are more complex than I would like, but they’re probably simpler than true simulation adherents would prefer.

And, much to the credit of the developers, they work.

Usually, designing a game to try and strike some middle balance between extreme ends of the spectrum results in a game that comes across as a disjointed mess.  Look back at my thoughts on Jagged Alliance – Back in Action and I think it comes through loud and clear.  But Wings of Prey manages to strike a nice balance where the most arcade-happy adherent might want for better controls, but won’t find the ones that do exist to be abhorrent.  I’m quite confident that given practice the whole thing could come quite naturally.

In Arcade mode, you find yourself hitting most of the standard arcade non-limitations, as it were.  Get your plane shot up?  Well, just avoid getting hit for a bit, it’ll be patched up.  Your weapons don’t run out of ammo, they just overheat and need some time to cool off.  Realistic?  Probably not; I believe history would have made some mention of the British planes that never had to worry about fuel or ammunition or taking several bullets through the wings.  I’m not sure if more simulation-oriented versions retain these limitations; regardless, the focus here is on clever flying rather than complete fidelity.

His insurance premiums are going to be through the roof! Ha ha! Also he’s probably going to die.

Fidelity does play a strong role just the same, though.  Your weapons kick back, and if you’re flying too low and without enough care that can easily interfere with your engines.  Trying to climb vertically too fast or too far will leave you with a crippled engine.  Getting shot tears holes in your wings, or if you’re unlucky leaves you with an inoperable engine in the middle of a dogfight.  At one point I had lost my rotor completely and had to drop my landing gear to try and glide to safety… which was working all right up until the part where I collided with a tree.

As everyone knows, all the trees in Dover were notorious collaborators.

The game is, on a whole, quite good.  For all my dislike of the genre and the setting, I never found myself frustrated or lost, although I wrestled with the controls more than I would like on a few occasions.  But that’s to be expected.  It does everything it sets out to do with a good balance between simulation and action.  The demo contains all of the basic training missions that you need to understand how you shoot gun and how to no crash, along with two missions from the game to give you a feel for the game as a whole, most of which involve shooting down planes (stunningly enough).

Is there anything to keep me from recommending it?  Yes, actually.  The developer here is the same developer behind the newer free-to-play offering War Thunder, and that presents a unique wrinkle in the setup.  The vitality of an online game is generally a bit stronger than a single-player game that’s a few years old; the multiplayer component of Wings of Prey has been altogether abandoned in favor of War Thunder, which might inspire one to simply jump into the latter.  It’s free, after all, and might even have a better set of controls and selection of planes.  At the same time, it’s also a game based upon PvP over any trace of simulation.

And it’s also another game in the long list of games creating this weird sort of deification of World War II in the zeitgeist, a game championing the heroic efforts of people trying to kill other people, something that’s always felt a bit uncomfortable to me.  This was a real war fought by real people, one in which one side did things that were so universally horrific that we feel comfortable calling them out as cartoon villains rather than a collection of real people.  It trivializes human beings down to a group of heroes and villains, which is very different when it’s being used as a narrative conceit instead of being applied to actual individuals, this sort of military porn that I find deeply uncomfortable.

Still.  If you like games in World War II and you like flight sims, Wings of Prey seems like a pretty solid option to check out.  It managed to please me, and that’s saying something.