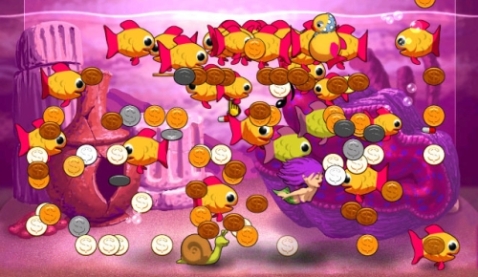 You probably pictured halfway to this to begin with, and that’s fair.

PopCap games, by their very nature, are not complex beasts to decipher.  You can get a sense of them within a few moments.  Oh, sure, they ramp up in complexity a fair bit, offer new wrinkles and the like, but these are not games with deep narrative structure and bewildering turns.  These are games in which brightly colored things interact with other brightly colored things in a fashion which is fun enough to play for a few hours without realizing that you’ve been playing for a few hours.

If you are turned off by the idea of bright colors being a fun ride, you may wish to re-examine your life goals, as at some point you appear to have mistaken cynicism for depth.

Insaniquarium is one of PopCap’s earlier offerings, and as such it’s a bit rougher than their later offerings but still offers more or less what you’d expect.  Sure, the game is probably best defined as a puzzle game, but it’s more of a fish-management simulator with pooped coins and alien invasions.  If you like PopCap games, you’ll like it.  You get the idea.

The presence of a whale, a mermaid, and a school of guppies lead to questions about scale and water composition that will never be answered. Which I guess can vaguely be qualified as “insanity,” so bully for the title?

The mechanics, as always, are straightforward enough that you can summarize them in a couple of lines.  You click your tank to feed your fish, who also continually poop money, and click on aliens to shoot them and drive them out of your tank.  Collect enough money to buy pieces of an egg, collect three and you move on to the next stage.  Sure, there’s a little more to it than that – feeding your fish costs money, there are upgrades to be bought, you get three extra pets in your aquarium that you don’t need to feed who provide passive bonuses – but at its core the whole thing is a simple, straightforward romp.

This is not a bad thing; in some ways, it’s a really nice breath of fresh air.  Like most games by the publisher, Insaniquarium plays cleanly and without too much muss, allowing you plenty of space to recover from mistakes and a variety of ways to keep bringing you back over time.  There are bonus stages, things to unlock, a slowly increasing challenge, and all the various doodads you’d expect given the publisher.  It could stand to be a bit more polished in places, perhaps, but it’s an older game and there’s something to be said for unrefined simplicity, isn’t there?

If anything, its real competition is its contemporaries.

PopCap is up there with BioWare on my list of studios that I largely respect, and it gets there for the opposite reason.  PopCap games have inherited the simple brilliance that used to keep Nintendo going, very simple gameplay combined with a lot of polish and a satisfying progression.  It’s a trick that a lot of studios seem to have lost in the rush to make each new version of a game better, or to just continually repackage things and toss out another installment with no real upward motion.  You pop it in and you go for a minimal cost, put it down whenever you want.  No sweeping narratives or the like, just some satisfying gameplay that’s none too deep.

Of course, PopCap has also been doing this for a very long time now.  You can buy a bundle of their games on Steam with more than 30-odd titles, and here’s a spoiler warning: they are all going to play pretty much the same.  Oh, sure, the mechanics will vary a lot from title to title, but they’re all a collection of games which offer you something quick and click-happy to play when you want to waste a few minutes, and then wow is it really eight already.

Oh, good, I had wondered when I would next get to stare into the face of horror.

Which is great.  Which one do you pick if you just want the one?  Because under those criteria, Insaniquarium starts to fall apart a little more.  The game’s age really shows; there’s no sense of the designers trying to rein things in after having thrown everything up on a whiteboard, replaced instead by a sense of “just keep throwing more things up there.”  I’m not just talking in balance terms, I’m talking about a game that seems to actively revel in throwing something new out every so often rather than letting you just steadily build on what you’ve already gotten.  Yes, this is a consistent feature of PopCap’s catalog, so you don’t wind up just using one strategy through the whole game, but it also feels far more unfocused and scattershot.

It’s ironic, on some level, that last week’s column was about a game that I called a Flash game broken free of its moorings, because that’s more or less the entire business model that PopCap has thrived by.  Blow up a thin premise into something fully featured, charge a slight fee, get people addicted, profit.  The difference, to my mind, is that you can get a lot more functional play out of a PopCap game.  Rather than feeling like some organism meant for another environment that somehow struck out into the great wide open, these games feel like natural extensions, like a leveled up version of what you might find offered on Kongregate this week.

But Insaniquarium is a bit more basic than that, coming across as more of a flat extension than an actual building up.  There’s very little that you couldn’t do with a flash interface, and I think it’s more likely to wear out its welcome after the initial shine has worn off.  Still, the time lockout on the demo is more than enough time for you to figure out if you want to go to the trouble of buying the full thing or whether your curiosity has been sated.

My curiosity has been sated.  Still, it’s a fun enough diversion, and for those with slightly different tastes I’m sure this comes down as the time-wasting bit of joy that you can use to while away unproductive hours.  Which is sort of PopCap’s whole thing, so I suppose I could have just stopped there and let it speak for itself.