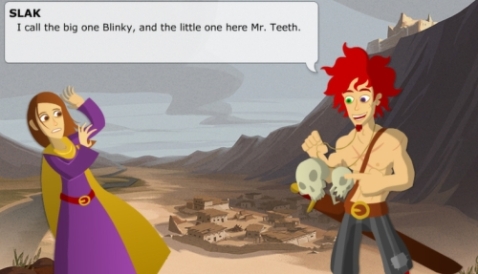 Next time I play this game, I’m going to name you Blinky just for continuity.

I’m very fond of tower defense games as a concept, but over the years I’ve started to get just a wee bit tired of them.  I mean, there are only so many ways that you can assemble a game based on enemies coming in straight lines toward a central objective before life just plain starts getting boring.  And at first glance, Defender’s Quest: Valley of the Forgotten is not the game to revitalize the experience, seeing as it’s filled with Flash-level non-animations and an interface that screams indie production in all the worst ways.

Then you play it and you want to continue playing it until you forget how to play any other game ever forever.  This thing is an absolute joy.

While last week’s demo barely fleshed out 15 minutes, this week’s offering was something I dove into and could happily have kept playing for another hour, both because it allowed me to do so and because the game is just plain great.  I have high praise for this one, and while it has its flaws, it is a superb example of a game being well worth the asking price. 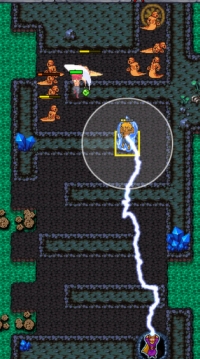 I know I’m fond of a tower defense game when I look at a tower layout in a demo screenshot and immediately get twitchy about how the units are laid out.

Let’s start with the basics.  The player character, named Azra by default, is a royal librarian infected with a virulent plague.  She’s tossed in a pit outside of the kingdom to die, and immediately is beset by dying victims who are turning into ravenous zombies.  That’s when she kicks into overdrive, moving to the space between life and death, summoning warriors to defend her from the hordes of beasts, warriors who conveniently can’t move at all but can attack anything that falls within their narrow sphere of attack.

Yes, it’s kind of an excuse plot to get the mechanical conventions out of the way, but you know what?  It works, and it quickly gets into fun territory, with a civilization that winds up being like some deranged fantasy version of The Walking Dead crossed with your usual fantasy quest.  You get new unit types added as you meet new people, and you can recruit additional units, leveling them up as they participate in battle while boosting them mid-battle.  Usefully, the leveling system strikes a good balance between the usual tower defense upgrades and the RPG side of things, forcing you to still allocate resources based on what you’re using while also offering a notable power jump for units that have been around the block a few times.

The game does, rather hilariously, claim that the plot was written by “an actual English major!”  Guys, we are not exactly uncommon.  English degrees litter the ground.  I found one in my Frosted Mini-Wheats box the other day and gave it to the cat.

Joking aside, the plot is spiced up by a fair amount of awareness and a lively enough telling.  It’s not screamingly original, but it does what a game plot needs to do – it explains why you’re doing what you’re doing and gives you characters that are, at the least, not annoying enough that you wish them actual harm.  It’s possible that the game’s metaphysics will eventually prove to be painfully dumb, but that’s a risk always taken. 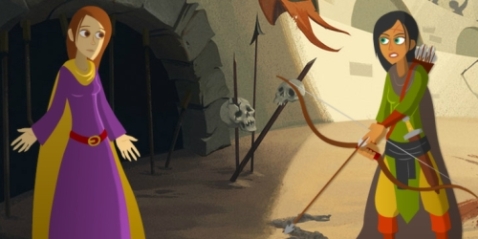 The actual tower defense parts are where the game gets higher marks.  You start out with just one unit type, but you quickly pick up archers and gain the ability to recruit more party members as needed, and there are still more unit types further on.  Each unit gains skill points as it levels, and each unit can be boosted several times, with the boosts required to unlock the higher-tier skills for a given unit.  You might have Triple Shot unlocked on your arrow-shooty friend, sure, but until she’s boosted to level 2 that skill will remain unusable.  There’s also weapons and armor to consider, along with a few spells that the player character can cast to aid the party in battle.

It is a bit of a shame that the units are resolutely gendered, but you do get a fair amount of control over their appearance for a sprite-based game.  Like any good tower defense, unit variety is the key to victory, with longer ranged units featuring blind spots while close-range characters can wind up slower and so forth.  All standard stuff.  The story sequences can also be replayed on ascending difficulty levels, complete with rewards for superior performance.

I admit it’s a bit of toy-based goobery, but I do love customizing sprites.

This also leads to plenty of strategy and tactical decision-making.  Yes, having another archer would be nice, but that costs money and it would mean not upgrading the bows of the archers you already have.  Of course, you could probably skimp on the berserkers for this map, but then you’ll be taking more hits… you get the idea.  There are varied enemy types, differing speeds, and so forth.  Nothing to force you into unpleasant situations, but plenty of different things to chew on as you hack up fields of undead.

And if you’re not sure if you like it.. the demo goes on for ages.  I clocked up an hour and a half and it showed no sign of stopping or slowing down, not to mention that there’s a handy-dandy export feature so that you can continue playing straight from where the demo left off if you want to.  There’s replay value, there’s plenty of stuff to try, there’s art that’s catchy enough to be appealing even if it doesn’t run ont he latest hardware.

More than anything, it’s fun.  It feels very much like a throwback in terms of storytelling and looks, but I was enjoying myself all the way through, a stylistic homage to the best parts of old RPGs.  The $15 price tag might seem a little steep, but it’s worth every penny, and it’s another game that I quickly added to my “must buy” list.  If anything, the real danger is in still getting stuff done, as it’s well into the “just one more round and then – wow, is it really one in the morning?” territory.

A sequel is, apparently, in the works.  I look forward to it, because this is one damn fine game.