Challenge Accepted: Do it yourself 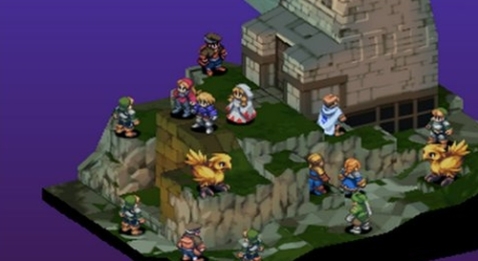 This is not an SCC, but it’s a nice shot.

Self-inflicted challenges and I have a long and lengthy relationship, due in no small part to my love of Final Fantasy Tactics.  An idle conversation among fans started the Straight Character Challenge – a full group of characters, all the same class, making maximum use of the game’s mechanics and taking down every battle from start to finish.  It took a long while, but every single class proved possible, albeit in many cases through abuse of the AI and odd little loopholes in the game’s coding.

I was never a super-active part of the community there, but I was active for a while, and I still admired the challenge a lot from the sidelines.  The thing is that self-inflicted challenges both do and do not factor into a game’s difficulty.  Sufficiently complex games lead to the creation of more such challenges, and they’re interesting, but they also don’t tie into the actual game at all.  And, in some cases, they get co-opted by the developers for just that reason.

For some games, the struggle is figuring out how you’re supposed to play these things normally in the first place.

So what makes something a self-inflicted challenge?  Two things, really:

The second rule is where a lot of these challenges get eaten away in modern gaming, because we have challenges in a lot of games that require you to do something in a much harder fashion than normal.  They’re called achievements.  Half-Life: Episode 2 gives you an achievement for successfully transporting a lawn gnome through the entire episode and then dropping it into a rocket, which is certainly challenging, but it’s not really self-inflicted despite the fact that you don’t pick Escort The Gnome as a starting game mode.  By contrast, an SCC perfectly qualifies – you’re eschewing the class changes that make up a big part of the game, while the game doesn’t even realize that things are any different than normal.

Arguably, The Final Fantasy Project qualifies as a self-inflicted challenge by that definition.  And you know, it kind of is.  Sure, it’s not making the games any harder, but it does involve me playing through them in a way that I wouldn’t play through them otherwise.  And not every self-inflicted challenge really does make the game harder, even though that’s the central concept.

See, there are two ways to provide such a challenge.  You can manipulate the mechanics – using only one class in a game with multiple classes, only using the weakest weapon available, using only magic in combat, and so forth.  Or you can manipulate your environment, such as playing without saving, playing one-handed, et cetera.  The only important point is that you aren’t doing so in the expected fashion.  Which means that yes, walking right up to the television and pressing the Zapper against the screen counts as a self-inflicted challenge, since you’re playing in a different way than the designers had intended and the game doesn’t notice it.

But that’s only part of what makes self-inflicted challenges weird.  The other part is that, again, they’re not regulated by the designers.  They can contain almost anything, including rules that can’t actually be followed.

You could play through Metal Gear Solid never firing a single firearm of any kind, but that challenge is always going to end in the same places, because you have to fight the bosses along the way and you simply can’t beat them with fisticuffs.  Trying to play Final Fantasy I without dealing damage is impossible.  With great care and long fingers, you might be able to finish Super Mario Bros. one-handed, but odds are low.  It’s trivially easy to make a challenge that’s so difficult to accomplish that it’s either impossible or may as well be.

So half of the challenge in self-inflicted challenges is finding something that is at once difficult and doable.  Often they start by someone having the idea and then seeing if it’s even possible to finish the game that way.

Hmm… no, this is too hard. Could we try this again and keep it hard, but less hard?

And then there are challenges that aren’t even harder.  The Legacy Challenge for The Sims 3 doesn’t actually make the game any harder to play; it’s just a set of rules for trying to build up ten generations of a family and seeing how well they do over time.  Nuzlocke Challenges in theory heighten the difficulty of the game, but in practice they largely serve to encourage the use of pokémon you would otherwise pass over or replace fairly early on.  These challenges do have rules and prohibitions, and they certainly make areas harder, but it’s very possible that you’ll find either run no more difficult than normal play.  (It helps that The Sims 3 is a sandbox anyway.)

Of course, sometimes you need self-inflicted challenges.  Strider 2 was only challenging if you tried to not make use of its infinite continues; there was no way to turn them off, so you had to actively work if you wanted to experience the game as something other than a series of moving pictures which periodically allowed you to die.  But can you really consider its challenge in the context of something self-created?

I’d argue that you can’t.  Self-created challenges can’t be used to “fix” a game that’s already easy; the most you can do is add in more arbitrary things to up the challenge.  But for better or for worse, the easy version of the game is the game.  I can say, for example, that Final Fantasy VI is easier than intended for various reasons, but putting in a bunch of added rules to beat the game don’t make the game harder.  Playing a game with one hand is just handicapping myself, not changing the game.

Don’t get me wrong – I love these things.  I think they’re a great addition to gaming culture and a sign of what can be done with a sufficiently deep game.  But at the core, these challenges are a matter of trying something out to see if it works by stretching what you can do.  They’re not a fundamental part of the game, and if you’re relying on players to make your easy game challenging enough, you really should have done a better job making it challenging in the first place.

Feedback is welcome through any means you care to use, like always.  Next time, I want to talk about competitive balance compared to mechanical balance.  After that, it’s past time to talk about difficulty levels.