At least it’s not World of Tanks.

I’m never going to quite understand the ways in which people love – absolutely love – first-person tank games.  This is not a new genre by any stretch of the imagination, as I remember playing a tank sim back on my ancient 486 PC in the days when the Turbo button meant something and a VGA monitor was absolutely pimp.  I also remember frequently being kicked out of that game because I “accidentally” hit my own side with mortar fire, which may or may not have actually been an accident.

Tank Universal is meant to speak to that urge while also indulging in your urge to pilot a digital tank in Tron.  The game doesn’t even pretend otherwise.  This is blowing things up in an arcade-ish setting that is only “inspired by” Tron in the sense that it can’t legally be set in the movie universe.  And while it suffers from a weak UI and some overall transparency issues, it largely does exactly what it sets out to do with a fair amount of competence and grace.

You don’t get a very solid picture of the story from the demo, aside from the fact that you belong to the Blue team and the other side is the Red team.  Apparently you live in a computer world.  Whatever.  I’m going to guess this cycles back to a sort of meta-story, but there’s not enough in the demo to even comment on it; I kind of got burnt out on “the game you’re playing is a game in the game world” levels of meta-examination with the whole .hack thing.  Maybe it’s great, there’s very little to base speculation on one way or the other.

So you’re down to mechanics, and in the demo, you are in a tank.  That is what you do.  Your mission is to go to the other team’s base, take the key from their core, and bring it back to your own so they will be deleted.  The other team’s goal is identical.  Along the way you need to collect things for your side to harvest to spawn more allied tanks whilst denying them to your enemies, and… actually, I’m going to level with you, I’m not terribly clear on most of it beyond the “blow up enemy tanks, don’t let them in your base.”

This guy is a bad guy, because he’s red. So you want to blow him up. But I don’t know what he does or what his deal is. This may be an allegory.

This is… partly the fault of the demo.  It surely doesn’t do a very good job of explaining the systems or making elements visually distinct, so you’re left to kind of due these things on the assurance that yes, these will totally be beneficial to you, trust us.  It’s a consistent failing, too.  It took me a while to even find where my overall shield strength was displayed, and even then it’s hard to be sure when you’re going to take a big hit or a little one from the fire that peppers your tank from all directions.

Having said that, even with only a dim understanding, the demo progressed nicely enough.  The UI does do a good job of tracking where your tank’s hull is relative to its turret, which is obviously quite relevant as the two move separately.  Your mouse moves and aims your turret, while WASD turns and accelerates your tank.  You won’t know where you’re going if you face your turret away from the front end, true, but it’s robust enough that you can pull off appropriate tank-related tricks like popping off shots toward a single target whilst skittering from side to side. 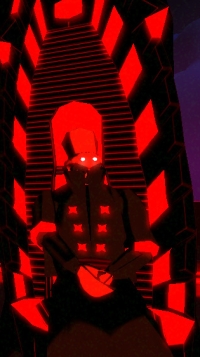 He looks reasonable. Let’s reason with him using our reason.

What hampers your progress is chiefly the general stupidity of your AI forces.  Enemy units seem to find you crazy appealing to shoot at, while your own AI partners just sort of pick out whatever target grabs their fancy, often popping one round into an enemy tank, getting bored, and driving off to fight someone else.  The up side is that none of them are terribly good at dodging fire, but that doesn’t help much when you’re taking fire from four different turrets at once and would like your teammates to just get rid of those stupid things now before they turn you into a smoldering wreck.

I realize that sounds pretty critical, but the fact is that it’s actually satisfying enough.  Yes, the AI is kind of dumb and you’re mostly up against superior firepower, but that just makes landing some well-placed mortar shots more advantageous.  Besides, it’s great fun to skitter about through fields of fire, grab the key, and pop a couple of quick cannon shots into the light tank that really wanted to prevent your heroic charge back to base.  The controls themselves are crisp, the graphics are clear if a little nauseatingly neon in parts, and you never find yourself asking “what do I do” so much as “how do I accomplish this goal?”

And hey, it’s fun.  Yes, a lot of the dials are turned away from simulation here – lobbing a shot into a group of allies doesn’t hurt them, for instance – but it has the whole digital thing to fall back upon.  It’s not a simulation of reality, it’s a simulation of a simulation.  We’re meant to expect abstraction.  The danger is only as high as the game wants it to be for the purposes of having fun.

If you like this style of play, this is a good arcade-level game that you can nab on the cheap.  If you don’t, it’s not going to convince you otherwise, but you’re not going to find yourself criminally bored while playing it.  I’m curious about some of the promises it makes about the main game, like stepping out of your tank (and I can’t say that I don’t have a fondness for that) and more of an upgrade system, so it’s quite possible that the full experience delivers quite a bit more than the demo.

Me, I’m not going to be finding out, but I don’t feel as if my time playing this one was wasted or unpleasant.  Considering how many demos I’ve played lately where I can’t say that, I’m going to mark that as a win.  This hits its target.