Who wants to play my idea? 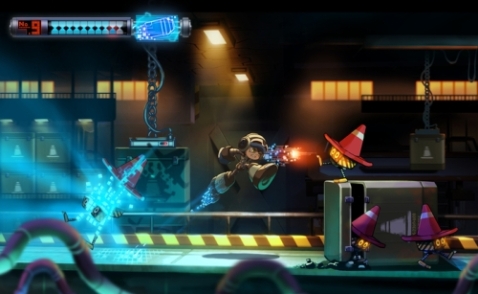 “Megaman without Capcom” is a pretty solid idea, admittedly, but it’s still just an idea.

You there!  Would you like to play my idea?  It’s a really great idea, and you can play it on whatever system you choose to play games on.  It’s cool, too, especially as it has separate but linked components for your smartphone, consoles, and desktop computers.  It’s got all sorts of exploration, a dynamic set of objectives that it can generate, and a deep and moving storyline that you’ll want to complete your way.  And you can!  There are romance systems and important decisions and epic combat, it’s great!

Oh, and if you like all of that, you’ll love my idea’s voxel support and robust physics engine, because those just make the game even better.  And it has online or offline co-op!  It’s the best idea you’ll play all year!

You’d like to play?  Great.  I’m going to need to see the cash up front, sixty bucks.  Great.  Have fun with my idea!  What do you mean “how do I play it?”  That’s not my department, dude, I just make the idea.  What do you mean you don’t like playing it?

There’s been a welcome bit of backlash against Kickstarter projects of late, and I say it’s welcome because gamers on a whole have a kind of toxic and fucked-up idea of how game development works.  To quote a great article on this exact mess, “Entrepreneurship is a concept based on risk, but if you have no-strings funding you incur zero risk.”  You don’t need to actually have a good game to win the love of the masses, just a lot of good ideas that sound good on paper and make people ask “why aren’t people making this?”

People also ask why flying cars aren’t being made, and the answer is because the idea sounds great on paper and runs into a brick wall of problems as soon as you start trying to actually make one.

I am not a developer, but back when Yogventures! was gearing up for its Kickstarter campaign for a game that will never exist, a developer took a look at it and quickly ascertained that it wasn’t going to work, because what really stops games cold in development isn’t money, it’s time and people.  We’ve watched the same thing happen with Broken Age, which more than funded and yet released half of a game, at which point funding the second half required more money.  How does that even work?  How do you wind up beating your goal by nearly ten times and still running out of money during development?

Because money was never the deciding factor.  Developing games is not one of those things where throwing enough money at a problem will eventually make it work.  Some games never come out fun to play, and some things are just too ambitious.

If there’s ever a game that’s setting up for disappointment based around a combination of nostalgia and creator worship, this would be it.

Gamers assume that the big problem with publishers is that they don’t want to fund some projects because they think they won’t sell well enough.  But I think a lot more projects get shot down by publishers because the publisher looks at the plans and immediately realizes that this project isn’t a gamble so much as it’s a money pit.  You can throw a fuckton of money at something ambitious and be left without a playable game, and when your project manager assures you that you can totally get it done despite the fact that no one else has ever tried to do this you know that someone here has unrealistic expectations.

But who cares about all of that?  Give us the idea.  Give us that raw, unfettered concept that’s so beautiful that we shut down the better parts of our brain that remind us that there’s probably a reason people haven’t done this.  Pay more money for more development, never minding that trying to fuse something on to the existing game is going to be about as graceful as anything else bolted on after the fact.  The idea of it is so lovely, it’s so tempting to think that money is the reason these games don’t exist.

Trust me, there’s nothing that’s going to make this all right in the bird nest.

You can see it in how Kickstarters are marketed to players.  Pay us money for this idea, not to support our solid business plan or our excellent product methodology or anything other than the idea.  The idea and the emotional response is king.  Are you one of the people who wants to complain about how older games were more innovative and modern games are derivative?  Here’s your throwback game; don’t stop to think that by definition a throwback can’t be innovative by its very nature.  Do you want to believe that there’s going to be another game like Minecraft only better?  That worked super well when someone tried to make the next Super Mario Bros. or the next Grand Theft Auto or, fuck it, the next Dungeons & Dragons.  Give us money.  The idea is worth it.

You can’t play an idea.  You can’t run an idea on anything.  And the best Kickstarters give you an idea and then leave just enough blanks for you to fill in the sort of idea you really want to be there.  Kickstarter is an investment platform in which you invest in an idea and then wave goodbye to that money, because it’s gone.  If you’re very lucky, you will eventually be rewarded for that.

I’ve donated to some projects.  I’ve yet to receive anything from some of those projects, and I honestly don’t expect to in some cases.  In one case, the process for receiving my rewards was so obtuse that I’m not sure if I could even if I wanted to at this point.  The ones that I have received have been average.  Not terrible, not spectacular, just average.

I bought ideas.  I liked those ideas.  But I couldn’t play ideas, I could just stare at them until they seemed like good investments to me, never minding that I’m not really investing for anything.

Venture capitalists invest in games because they want to make money off of them.  You can call that evil, but that’s pretty fair from where I’m sitting; they’re putting up money on the basis that they get something back, in this case more money.  But Kickstarter pledgers get nothing once the game comes out other than, well, the game.  If it turns out to be great, average, or terrible, their return is identical.  All that changes is how likely the studio’s next Kickstarter is to be a hit.  But who cares?  You can just stretch out an eternal crowdfunding campaign on the game’s site and have people toss more money onto the pile.  Buy more of the idea.  Buy this idea in an installment setup.  Who wants to play an idea?

Remember, this was also born from an idea, and that idea was to fix the problems that existed in previous versions of the idea.

I don’t think that Kickstarter developers are defrauding people; that implies malice.  I think it’s a combination of gamers not knowing how development works or how productive “throw some money at it” is as a strategy (hint: it doesn’t work) and developers realizing they could rake in a cool 100% profit on everything they sell you.  Which is nothing more than an idea.  Did you know that a lot of the updates for Duke Nukem Forever during its interminably long development cycle were specifically constructed just to give people something to look at?  That they weren’t even in the same time zone as gameplay footage?

This is the issue with Greenlight, with crowdfunding, with anything that puts forth this idea – it’s not money, dear boy.  Money is not why you can’t make your crazy idea.  Money is needed to make it, yes, but doubling your budget won’t make it any more doable, it’ll just let you fling more time and effort into said idea which might just plain never work.  And you’ll still have the adulation of people who will never stop believing in the idea, regardless of its reality or utility.

Great ideas are easy; great games are not.  And the two are not identical.