Defiance and the dancing bear 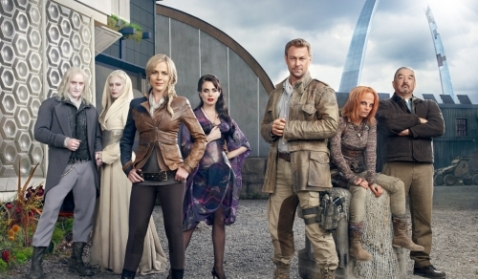 Let’s all pause for a moment to appreciate the show giving us another non-English curse word to pepper speech with while avoiding strict censor guidelines.

The dancing bear joke really isn’t; it’s more of a punchline in search of a setup.  It’s simple enough, though.  If you see a bear dancing in the circus, you’re not concerned with his form.  You’re just impressed that the people training him got him to dance at all.  Sure, it’s mostly just shuffling back and forth, but does it really matter as long as it counts as dancing?

A lot of media has the dancing bear problem.  Strictly speaking, for instance, it doesn’t matter if the Transformers cartoons are any good, it just matters whether or not they sell toys.  Skylanders toys could come to life at night and try to kill your pets, but the important thing is that they tie into the video game.  You get the idea.  When you’ve got any piece of media tying into something else, you’re starting out with a dancing bear.

Defiance falls into that category quite handily.  It’s a show that’s made to tie into an online game running at the same time, with the promise that the two will feed into one another – events in the game are reflected by the show, and vice versa.  The problem being, of course, that a show not aimed at supporting a merchandising line can’t survive for long on novelty.  It’s not enough to be a dancing bear here; you have to be a bear that turns out to be a pretty good dancer.

I’m not sure how many shows consider “ominous Brent Spiner-type” to be a necessary part of their cast makeup.

If it were not already obvious, I am not an employee of Trion Worlds and was not present for any part of the discussion that occurred between the conception and release of Defiance, game or show.  I’m an outsider from the word go, which makes me the audience, not the mastermind.  Someone thought that this was a good idea, and in some ways it certainly seems like it, linking two forms of media together in a way that you only can in a modern environment, with two updated and ongoing forms of entertainment.

Of course, it was also a good idea when City of Heroes tried doing the same thing in a comic book, and that didn’t exactly work out.  Part of it was because the comic was not all that good, but also because there’s a lot of gaps between the needs of a comic and the needs of a game.

Having players and characters cross over from one to the other is alluring.  Unfortunately, bringing a character over from the game into the other medium has a fair bit of lead time, meaning that by the time you get someone’s character onto the screen it’s going to be months later.  Not to mention that both sides need to be able to stand alone if something doesn’t pan out.  Defiance the show needs to survive without Defiance the game, and at a glance you wouldn’t expect it to be able to do so.

Thus, the dancing bear.  You look at the show and it has to keep itself afloat based on a game run by a company which has a big ambitious plan… just like all of its other big ambitious plans.  And it’s also on a network that is considered to be within spitting distance of the Lifetime channel, which spends most of its original programming budget on unresolved lesbian tension and broken crock pots.  This is why a lot of people clocked out early on, because if you can see the writing on the wall, you know how this particular story ends.  Don’t get invested and you won’t be disappointed.

So it came as a thorough surprise to me that the show hit a second season.  And even more of a surprise when I sat down to watch it and found that despite expectations, it’s on the good side.

Don’t get me wrong – the show is obviously so desperately in love with Firefly that you can see it doodling Malcolm Reynolds in the margins of a high school notebook.  The CGI in it frequently looks cheesy, especially when the producers opt to use it instead of actual driving sequences.  Pretty much all of the characters come across as simple starting personalities you can sketch in full within a few minutes of viewing.  The cocky newcomer with a dark past.  The strange girl with mental powers.  The mayor facing pressure from all sides.  Graham Greene.

But it’s pretty good.  Part of that, of course, is that having Graham Greene involved in a project always makes it notably better.  But more than that, even if the characters tend toward stereotypes, they’re fleshed out enjoyably and play off one another in interesting ways.  Sure, Nolan is a scruffy-faced fallen paladin in the most basic sense, but the show goes out of its way to point out that his “kick down doors and stop all the bad people” approach is utterly inefficient.  There’s a legitimately great scene where he’s talking with Datak Tarr (the manipulative not-quite-evil criminal mastermind of the show) and Tarr is carefully pointing out everything Nolan’s doing wrong as the voice of the law… while ignoring his own huge blind spots that have held him back from his own ambitions. 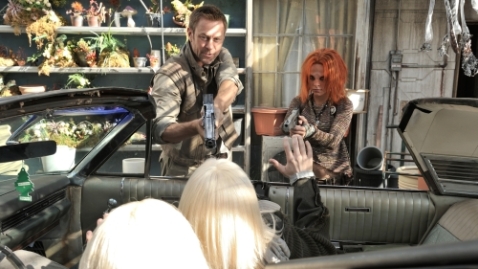 Even if they are running drugs, this may not be the best way to foster trust in the community as a whole.

For that matter, the show steals a page from better playbooks and ups the stakes for the villains as well as the heroes.  Oh, sure, the villains are manipulating events and putting people into the line of fire, but every major event doesn’t end with someone snickering and whispering that everything’s going according to plan.  The first few plots they put into motion fail, and there’s a need to step back and regroup.  It’s more organic and more entertaining that way, rather than having one flawless group of antagonists directing anything.

I haven’t seen the second season, but I’m told it continues nicely from the first.  The characters are fun, the plots are engaging, and while there are some plot developments you can see coming easily the show rarely spends time drawing out those conclusions.

And I can’t help but realize that the main reason I avoided it in the first place was my expectation that this was a dancing bear.

If you spend your time dealing with a lot of the same media I do, you see this happen over and over.  There’s even a trope for precisely this sort of thing – hearing about something new that you want to watch but you don’t, because you’re certain that it’s going to be killed before it gets a chance to develop into something good, is unsurprisingly called the Firefly Effect.  Audience investment in something new is directly tied to audience faith that this something new will have the time to be around rather than getting unceremoniously killed two episodes in.

I realize it’s an old and well-worn trick, but treating fantastical technology as mundane because of its familiarity to the people using it is still a nice way of introducing the world at the macro level.

Defiance has that in spades.  It looks like a dancing bear, but when you get right down to it, it’s a show that can stand on its own without any touch of a game creeping in.  The existence of the game seems mostly to be a bonus rather than a cause, especially if you have strong feelings about playing an Irathient in a game.  It has an ongoing plot that really does require continued attention, and jumping in a few episodes late can cause you to completely miss important developments as well as missing important bits of backstory – which is also important, seeing as how the show largely does a good job of tossing you in on the deep end of post-apocaylpse post-war post-everything Earth and letting you sort it out from what the characters say and do during the show’s runtime.

There’s a tension there.  Because it’s good enough to want more, but you don’t want to watch if it’s just going to break your heart later on.  And you get the feeling that what really matters is simply that it dances, regardless of whether or not it dances very well.

Then again, maybe that’s part of the problem.  If you like this sort of stuff, you tend to cast a critical eye over upcoming media, picking out the stuff that you think is interesting which you then pass over to avoid getting your heart broken.  So you stay away from the weird projects that you know won’t make it to a second season, from the games that you know don’t have a long lifespan in them, from the comics that are going to set up an entertaining mystery in the first five issues and will never get the last seven needed to explain it.  We figure out where the failures will come, Cassandra-like, and we stay away from them.

How many of those failures came from people deciding that they would not get wrapped up in something until they knew it would end well?

Maybe we need to stop using our fear of something only being half-finished as an excuse to keep from getting invested.  Yes, I’ve been burned here before, and it stinks; seeing something nifty never reach a satisfying end doesn’t exactly fill you with warm fuzzies.  But perhaps a one percent chance of a show seeing an adequate conclusion is worth the ones that aren’t going to make it.  Maybe we should occasionally buy comics that we know will get killed long before they make it to trade, because the story and concepts present in the initial few issues is worth the question of how it would all have ended.  Maybe it’s all right to buy Game 1 when Game 3 has no chance of coming out.

No, Defiance isn’t the best show I’ve ever watched.  But it’s interesting enough that I want to see where it’s going from here.  And yes, I’m willing to take the chance that maybe it won’t go anywhere at all, because otherwise you wind up in a state of permanently avoiding things until they’re finished on the basis of they might not be finished.  I’m not talking about ponderous projects with a clear finish line that you’re saving for when they reach their conclusion, I’m talking about projects that are definitely not going to make it if people don’t put down money and say “yes, show me more, develop this, impress me.”

As it turns out, some bears can dance pretty well if you give them half a chance.  And even if they don’t finish the routine, I’d prefer to see the start.

This article is a Patron-funded piece, outside of the usual schedule.  If you like what you see, take a look at the Patreon page; you can fund an article yourself and get access to bonus articles.

2 responses to “Defiance and the dancing bear”