Two weeks ago, I put forth what I think is a fairly simple philosophy for getting storylines moving in games – I don’t build the story.  I just lay out tools, and the other people involved happily build the maze themselves with a minimum of prompting from me.  I’m proud of the article and think it’s pretty completely on-point.  What I didn’t go into depth about was how you do that.

Sure, it’s all well and good to say you assemble tools, but I’m willing to bed that if you put some lumber and some tools in the yard and then hide, you will not find people coming by just to build you a shed.

A lot of it comes down to tricks that work during tabletop roleplaying and are easily ported to roleplaying arcs just as easily, with a few added tricks brought on by the nature of the beast.  So once you’ve got a plan in mind, it’s time to start putting your tools in place and using them to let players assemble a maze you never even had to sculpt.

Yes, I did get infested by the virus we’re trying to stop, but if you had been there the whole thing would have made perfect sense. And, you know, not seemed dumb.

The traditional Morton’s Fork is a situation wherein you have two possibilities, either of which leads to a functionally identical outcome but for different reasons.  The original form was an argument on taxation that went thusly: if a noble lived opulently, then she obviously had plenty of money to pay high taxes, but if she lived frugally, then she must have a great deal of money saved and could afford to pay high taxes.

In roleplaying plots, the idea is that if you want to have something happen, don’t assume that it will and don’t force players into taking that route.  Instead, construct multiple possibilities… all of which filter back to the same outcome that you wanted in the first case.  For example, let’s say you want the players to be locked out of access to a certain city.  They could commit a crime in the city trying to stop an antagonist and be forced to avoid the city from then on out, lest they be arrested, or they could decline… at which point the crime that they would have acted to prevent happens and the city goes into lockdown, letting no one in or out.

The key here is making sure that the players feel like they had complete agency in what happened.  You shouldn’t have a situation where if players do A, X happens, but if players do B specifically to prevent X, you should not handwave and say that X happens anyway.  It’s tricky, but a few well-placed forks that lead to functionally identical outcomes give you gates for what happened while still making the storyline feel more open.

The room of plot coupons

Something I have learned from years of playing tabletop games is that hints never work.  You could have a room that contains a flashing neon sign pointing to the important item the players need to retrieve, and they will spend four hours searching through a pile of decorative soaps with absolute certainty that they need to do that.  So I stopped providing hints.  When someone looks, they’ll find it.

An intrigue-heavy tabletop game has the room to take players aside and gently pull them back on the proper path, but in an online environment – and in most tabletop roleplaying, for that matter – people simply don’t have the time for that.  A far better option is to always spin things into the right direction, even if sometimes it takes a few go-rounds to get there.

So, for instance, the other people are absolutely convinced that a minor NPC’s house needs to be searched.  Instead of declaring that there’s nothing of interest in there, or having a “right” method for players to undertake the operation, let them approach it however they want.  This is where those forks can come in handy, too, as you can tie their approach into what happens next.  Slow, stealthy break-in?  Sure, they find the next piece of information they need, but it’s going to result in someone dying because they took too long.  Just knock down the door, weapons drawn?  The antagonist gets jumpy and kills the same person to cover his tracks.  But whatever they’re seeking, they should find, and they should be allowed to feel that their approach was the “right” one. 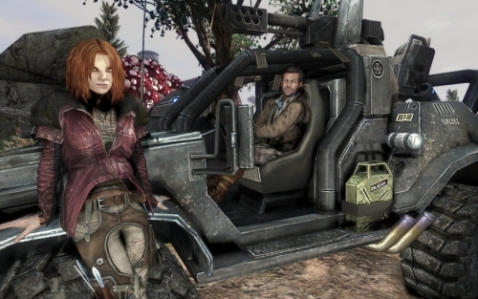 Most players assume that there’s a script.  In the loosest sense, that’s true.  The trick is that your script is constantly being amended and giving other players a reason to dance in the spotlight for a while.

One of the most powerful tools in your arsenal is the fundamental assumption on the part of most roleplayers that there is something they’re supposed to be doing with a pre-determined event.  Both because a lot of events are run by people who aren’t really clear on how the whole nature of running dynamic events with player feedback are supposed to work and the simple reality that it’s easier to assume a plot has a “right” outcome.  We’re even taught that by RPGs; make all of the best choices and you wind up with the best ending.  Although you usually have to complete a few unrelated sidequests along the way, but the point is that there’s a good end and a bad end.

In reality, there’s only one end, and it’s the good one, in the sense that things are more interesting after the arc than before it.  So you are constantly altering what’s going on outside of a loose framework to give people something interesting to do.

The assumption that there’s a right way to do this helps you, here.  If you agree with Kyle that yes, his character is right, this totem is a secret relic from a cult he dealt with in his backstory, Kyle is going to lead people onware to the next part of the plot.  You can work that in.  Kyle is happy because he feels like the story ties directly to him, and he’ll move forward with certain expectations about what happens next, and often you can use that to springboard into someone else’s area of interest or backstory or whatever.  Players feel better because they think they’re being clever.

And they are; it’s just that they’re tying into the blanks you had left for just this purpose.  Which is pretty keen.

For next week’s outing, I want to talk about building character flaws and characters who grow without abandoning those flaws you loved.  The week after that?  Let’s talk about drugs and how they can be a part of your character – or something you avoid.  Either way.