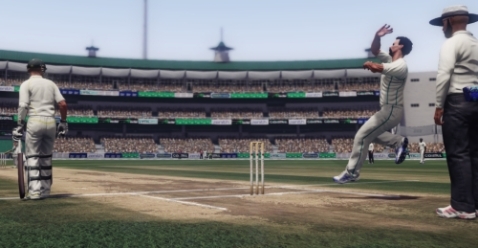 Cricket, the last great mystery of our age.

Ladies and gentlemen, when I rolled this game, I knew I was in for a treat right from the beginning.

I do not know much of anything about cricket.  I know that it is a game that is enjoyed in the UK and several points directly related, but if asked at gunpoint to name three distinct positions in cricket I would be reduced to vague guessing and prayer.  I know absolutely nothing about the rules of the game.  And if that weren’t enough reason to be smiling about this game, there’s the simple fact that it also requires a controller, thereby suggesting a level of precision and expectations for play that I had no way of living up to.

So why did I know I was in for a treat?  Because either I would be in for an unexpected blast or I’d be reduced to playing a Very Serious Sports Game as something between Grand Theft Auto and NBA Jam due to total unfamiliarity.  I can’t say it’ll provide a good evaluation of the game compared to other cricket titles, but you know, I was going to have a lot of fun on the ride there.

I’m not sure if I was treating this game with all of the dignity it deserves or not.

Upon starting the demo, I was immediately greeted by what appeared to be a kindly older British uncle and a small selection of modes, one of which seemed to allow me the option of customizing a player.  As you can imagine, this was the most important option to me, and it’s probably a good thing it was as well, for reasons that will become clear shortly.  So it was time to make my custom player, Handme Fartwhistle from Australia, standing at a mighty 160cm and with a swing that would make men cry.  It would make lots of people cry, really.  No one particularly wanted to see Fartwhistle play, that was the point I was going for.

Now, I could be wrong, but I am under the impression that cricket is not generally played by gnomes with multicolored hair who also appear to have a rare form of progeria.  (His listed age is 13.)  However, I appreciate the fact that Don Bradman Cricket 14 allowed me to fully indulge my sophomoric fantasies.

I think so, anyhow.  For all I know, Fartwhistle (affectionately called “Young Gassy” by the announcers) is a model of what all cricketeers can aspire to be, and such a young man would already be finding himself plastered on lunchboxes across the world wherever lunchboxes featuring cricket-players are sold.  Do they even do that?  I’ve always had the impression that cricket is a sport exclusively played by, enjoyed by, and understood by middle-aged men.  I really know nothing about it at all.

But that was all about to change, I told myself.  I was going to explore the dark heart of cricket, which presumably would mean jumping into the other game mode, listed as… practice.

All right, that’s ideal.  Yes, it means that I can’t play out my dream of having Fartwhistle play out a sample season to the adulation of fans, but let’s be honest here, that would have been a bit much for a demo.  Bring on the practice!  Surely this will explain what the game is like and give me a clear picture of what to expect!

Well, let’s see.  My options are Match Practice and Batting Practice.  Except that Match Practice is blocked out, seeing as I am in the demo.  So I’m left with… batting practice.

Under what circumstances did this seem like a good idea?  The character creator is, honestly, quite good.  There are no shortage of options so long as you don’t wish to play a lady cricket ranger (I also don’t know what the players are called), and I quite enjoyed toying around with it, but that’s not really demonstrative of the game, is it?  You would think that the game would include a bit less “fuss about whilst making your player with male pattern baldness” and a bit more “here is how the actual game you will spend 80% of your time playing feels” in the menus, wouldn’t you?

I don’t know if this is successful batting or not. Perhaps it is? Perhaps this is a prelude to the cricket equivalent of the Jecht Shot?

All right, well, at least batting practice seems rather straightforward, yes?  I mean, I know nothing about cricket, but I know that I’m playing a man with a stick and there’s a ball hurtling toward me.  I’d be willing to bet that my goal is to hit the ball, yes?  Let’s bring on the tutorial explaining how batting is handled in this game overflowing with positive reviews as one of the best cricket games of all time!

And by “tutorial” I of course mean “drop me in front of a pitching machine with no explanation.”  That’ll do nicely.

Balls fly toward me.  I have to hit them.  How do I hit them?  What button do I push?  What’s a good pitch and what’s a bad one?  Are there fouls?  There are little colored indicators around the pitches, what do they mean?  I can nudge my cricketmaker to the left or the right, do I need to do that?  Wait, the right analog stick seems to swing, that’s something… what the hell am I doing?  Could someone provide helpful pointers?

I’m not simply lamenting a lack of understanding of the rules, here; quite frankly, that’s on me to begin with.  I could have looked them up at any point, but declined to do so specifically because, you know, I think this is funnier.  But you would think that the game would at least offer some sort of basic tutorial in-game rather than forcing a look at the manual.  A glance at the manual revealed a control scheme that still made roughly as much sense to me as if it were written in Latin and coated in obscure diagrams.

There’s a reason that games have more or less abandoned manuals in favor of in-game tutorials, and that’s because pages of “press X to jump in this context” teaches you far less than something in the game showing you what you’re doing and how it impacts the game world.  It’s especially important in a demo, which is, again, meant as a demonstration of what is possible.  It’s even more important when the correlation between the controls and what you expect the controls to do is far less obvious than it would seem at a glance.  Would you expect the right analog stick to control your batting?

Needless to say, batting practice was a miserable failure, and thus ended my foray into Don Bradman Cricket 14, which has given me no more insight into the cricketer’s world than I had before.  Is it a good game or not?  I haven’t the vaguest idea, nor am I particularly inclined to find out more; the demo sort of fails at the “demonstration” part of its description, and it certainly fails at offering any explanations for what you as a player are trying to accomplish.