Things are cascading toward what would appear to be the endgame awfully fast in Final Fantasy IV, although the chances of it actually being the endgame are about nil.  For one thing, I’d be really surprised if one of these games ended with characters in the late teens or early twenties in terms of level.  Also I’ve still got more elemental fiends to face, I’m sure, and there are a lot of plot elements still unexplained.  Plus, you know, I checked.

But we’re still swinging right along in our goal to get an airship, rescue Rosa, kill Golbez, and then… do something?  I don’t know if Cecil actually has a plan for the endgame here.  Once Yang is kitted out again with some equipment retrieved from the Fat Chocobo and a few more things bought in Baron (you can unlock those stores now), it’s time to move forward!  By which I mean it’s time to totally ignore stated objectives and head back toward Mist, because there’s stuff there, even though it makes no sense whatsoever.

Apparently no one squatting in the ruined buildings of Mist recognizes Cecil now that he’s turned super-white, so no one is up in arms about him walking through town and pilfering the ruins.  That nets the party a couple of nice upgrades for people and some attack items, always welcome.  After that, there’s nothing to be done but trek back down; none of the enemies provide a substantial threat anyway, nor do they offer much in the way of experience.  It’s not a mandatory trip, but it is a somewhat helpful one.

Making our way back to the town leads us to an unlockable door, which leads to the Ancient Waterway.  There are a lot of secret walls in here, a practice I kind of had wished was thrown out after Final Fantasy III, since it makes every dungeon an exercise in bumping up against walls and hoping to find the fake one.  It’s also got an array of enemies that are weak to Lightning, making Yang’s punching with Lightning claws quite valuable.  There’s no real boss in here; you just slip your way into Baron’s moat, then make your way into the castle proper, climb up to Cecil’s room, and take a nap.

What?  It’s a free recharge. 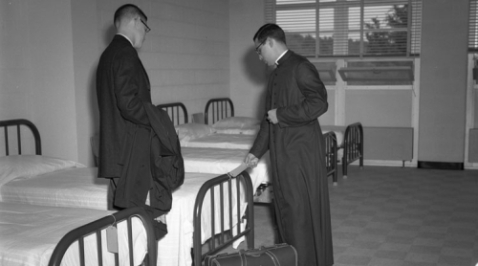 Remember, kids, no matter how urgent your mission is, you can always lie down in a bed and nap for a few hours to recover all injuries.

Once you’re in the castle, you quickly run into Baigan, the captain of the guard from the start of the game.  Turns out he’s working for Golbez as well and transforms into a monster, complete with snake arms.  It’s not a terribly difficult fight to win, though, since he lacks much in the way of offense;  the trick is just to take out one arm before buffing Palom’s magic attack and letting him unleash a big spell on Baigan’s body.  Cecil’s a bit shaken by this turn of events, but he marches onward.

After another nap, anyway.  Look, it’s a free recharge.  Also, I’m amused that time is taken mid-mission for not one, but two naps.

Cecil and company burst into the throne room to find the King, who congratulates Cecil on coming back… and then reveals himself to be someone else entirely, asking Cecil to give his regards to Scarmiglione in hell.  It’s the Lord of Water, Cagnazzo, who looks like nothing so much as a carnivorous turtle minus a shell.  Something less than intimidating.  The fight with him is fairly interesting, with an occasional charge-up period that forces you to switch from Ice spells to Thunder spells unless you want your team to be quickly turned into smears on the floor.  Given some Hasted and Berserked physical characters, though, tearing him apart is fairly straightforward.

After the fight, who should show up but Cid?  After a bit of banter and introduction, the group heads to Cid’s airship, at which point Cagnazzo’s voice promises that he still has one last trick.  The walls of the room begin closing in, the doors on both sides lock… and the twins figure out an immediate solution, placing themselves as barriers before turning one another to stone.  Palom and Porom are frozen there, petrified, which shakes Tellah up a fair bit; he feels personally responsible, since he was older than either of them.

Golbez is scheming about getting the last Crystal, and Kain suggests using Cecil as a catspaw.  Back in Baron, Cid leads the group to the Enterprise, his latest airship, which takes off from the castle in a plume of smoke and theatrics.  No sooner has the ship taken off than Kain shows up, offering a simple trade – the Earth Crystal in exchange for Rosa.  To the surprise of absolutely no one, it turns out Cecil is indeed willing to risk the fate of the world on the basis of one girl’s life, which I think qualifies him as an easy mark.

“Oh, sure, we’ll trade you this bomb and then you’ll be on your way, right? This was a good decision.”

Don’t get me wrong, I’m not saying it’s exactly a happy decision, but let’s think this through – whatever Golbez wants, it’s likely to result in very immediate danger for everyone on the planet, Rosa included.  This is like holding someone hostage with a knife and offering to trade your hostage for a gun.  What, exactly, do you think happens after the trade is made?

Ah, well.  We have an airship now, and that means we can go exploring!  Albeit not much, because it turns out we’ve seen most of the world already now.  The town of Agart is full of half-dwarves and crap equipment, but there’s not much to do there right now; the town of Mythril, on the other hand, has a bunch of nice equipment for sale at fairly high prices.  Luckily, whacking at enemies outside of the town provides a fair bit of cash as well as some helpful levels, so there’s no reason not to putter about and pick up some gear.

Well, unless you’re tired of grinding, but if that’s the case I’ve got bad news for you, folks.

Once the grinding is done, it’s time to make for Troia, one of the last unexplored parts of the world.  Troia Castle’s guards mention that a Damcyan man washed ashore claiming to be a prince, which means that you know exactly who’s here.  Edward apologizes to Tellah again about what happened to Anna, and he wants to sign on with Team Cecil again, but he’s currently sick with a bad case of Plot Cancer.  He does, however, give Cecil some Whisperweed, an important thing to have before the next major boss fight.  We also talk with the reigning ladies of Troia, who explain that the Dark Elf stole the Earth Crystal and set up a magnetic field to prevent anyone from wearing metal equipment in the dungeon.

Yep, it’s another damn gimmick dungeon.  At least we don’t have to spend the whole thing in Mini.  Naturally, this means that all of that Mythril equipment can’t be used inside of the dungeon; however, it can be used on the boss once you get through it.  After a few quick gear substitutions, the team is ready to bang through the dungeon, get the Earth Crystal, and then quite possibly sign over the fate of the world to the villain so that one girl will be very briefly safe.