Not one of the more interesting layouts, but those are kind of impossible to show in a two-dimensional image.

It’s kind of neat how tower defense games, as a genre, have reached a point where they have two distinct sub-genres as a bare minimum.  All of them have the same core elements – enemies come from point A and move to point B, make that as difficult as possible for them – but in some games, the path is already laid out.  Your job is to place your towers at the right points for optimum damage, as seen in games like Defender’s Quest (which is excellent).  Others ask you to build the path, walling your enemies in and creating the most circuitous possible route through walls of cannon fire.

System Protocol One is of the latter variety.  I used to think it was my preferred sort of tower defense game, but time has cooled that particular bit of ardor.  I wouldn’t say it’s bad by any stretch of the imagination, and it definitely hits the notes it’s aiming for, but I suspect a good portion of my affection comes down to my usual love of anything involving tower defense.  Still, it’s an entertaining enough way to spend some time clicking away, so doesn’t that fulfill its purposes?

The plot for the game is about as utilitarian as you can get.  Simply put, you are an IT professional working on defending servers from outside invasion.  Your enemies are viruses, your defenses are, well, programs, so on and so on, it’s an excuse plot of the highest order.  You probably don’t care about the plot anyway, and you’d probably be right to do so, as nothing in the demo indicates that the plot is anything more than a premise which allows for tower defense in non-rectangular arenas as you build up a maze to force your enemies through.

That’s the gimmick, if you were wondering.  Not every arena is a standard rectangle.  Sometimes they’re cubes, or donuts, or tubes, or whatever.  It adds a bit of a wrinkle to the gameplay, but not really, as there’s still the same core design goals of working through enemies that don’t go over or under or whatever.  In practice, it mostly means that you have the lay out your mazes marginally differently, but only marginally.

Structures are fairly familiar to anyone who’s played these games before – the default turret, the big slow one, the small quick one, and so forth.  The various data gates you can lay down in the path of enemies have a couple of interesting ideas, most notably the Honeypot (which absorbs and kills viruses whilst getting smarter at killing them), but for the most part it’s the same sort of thing you’ve seen in several other similar games.  What this one offers over its many competitors is largely geometry and wireframe designs with a chiptune soundtrack in the background.

It also lacks some fiddly features that are sort of expected.  There’s no way to directly upgrade a structure from the unit breakdown, for example; you have to specifically click the upgrade button and then deal with the slightly fiddly interface to select the proper structure.  Since none of the enemies really look like anything, too, it can be a bit more annoying to pick out the different types, not substantially helped by the fact that you can only see enemy unit stats after investing in a structure which provides no other function.  Your number of towers is strictly constrained, which does require a bit of planning before layout but also can wind up feeling a bit frustrating.  At least it makes walls useful.

Despite all of that, I kept playing it rather avidly, because like I said, I like these games.  Which is where I find myself wondering if the game itself is much good or if I’ll just take pretty much any excuse to carefully send enemies to their maze-based doom, both of which sound entirely plausible to me. 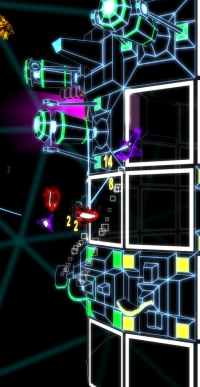 Submit yourself to the judgement tube, viruses!

The mercy is that the box price (so to speak) is an entirely reasonable five dollars.  At the same time, the game is going to get old.  It doesn’t have a lot to offer outside of the same basic mechanics you’ve seen in plenty of Flash games over the years, and I’m willing to bet that a quick jaunt on Kongregate would unveil the exact same game minus the three-dimensional shapes and with significantly less cost to you.  It lacks the sort of steady addictiveness of the aforementioned Defender’s Quest, which promises to keep hooking you in long after you thought you’d already wrung all of the novelty out of it.

But then, maybe that’s the best way to play it – jump in, play a level or two, then do something else.  Not trying to chew through the whole thing over a long weekend, but appreciate the subtleties and the permutations available to you from having a slightly more robust rotational model than usual.  Of course, that just raises the question of whether or not it provides enough entertainment to justify the price tag to begin with, even though it’s not terribly high…

It’s not a stellar example of what can be done with tower defense, but it’s a solid one.  As with an awful lot of games that wind up getting highlighted here, the question is whether or not you want solid or you want something really, truly grand.  I keep finding myself on the fence about it because while I don’t find it to be unusually good, I do find it very solidly designed, and there’s enough substance to keep the gameplay interesting after a few rounds.  It also features a solid and helpful tutorial, which I’ve repeatedly said is absolutely vital when building a demo.

So if you like your maze-building tower defense games, well, this is certainly one of them, and it works well enough to keep you playing and engaged.  If you don’t like them or don’t feel the need to own one, this ain’t going to be the title that changes your mind.