I just can’t stand being told I’m a horrible person too many times in a single day.

As long as we’re talking about challenge, we have to also talk about the things which create more challenge that aren’t a function of any part of game design.  They’re not elements of poor design, they’re not fake difficulty, they don’t fall under the header of things that appear to be challenges but really aren’t.  Yet they’re still challenging, and they can still knock you flat on your rear just as surely as a genuinely challenging bit of content will.

This is a collection of what I call meta challenges, challenges that are very much there but also have little to nothing to do with the actual challenge level of the game.  None of them are coded into the game, but all of them are elements that make playthroughs more difficult, often stalling players entirely despite the fact that they’re obviously not a part of the core experience.  Some of them brush up against fake difficulty in a few places, but all of them are still distinct from it by not providing a challenge to every player, just some players.

I would probably do a lot better in DmC if I could just wrap my head around the differences in position between the ranged button and the normal melee button.  Or if I was better at swapping between weapons mid-combat.  And none of this is even remotely the fault of the game, because it gives me all of the tools to do exactly that.  I’m just not very good at using them.

Sometimes the biggest problem with a control scheme isn’t that it’s unwieldy or awkward (which is in the territory of fake difficulty) but simply that it runs counter to your assumptions and preferences.  It’s easy to be tripped up if, say, you’re used to the normal American Final Fantasy scheme for confirming or cancelling commands and then suddenly pick up a game using the Japanese system, which flips the buttons.  Neither scheme is better or more logical or even more intuitive than the other, except I’m accustomed to one and not the other and thus find myself having to re-adjust when it’s flipped.

And in some cases, it’s really not even the fault of the game designer.  For some reason, I can’t get myself to hold a controller properly at times, and my index fingers will often shift back and forth between the shoulder buttons instead of letting my middle fingers take on that function.  The controller is fine, and a control scheme that requires me to use both shoulder buttons on one side is not actually awkward.  I’m just making it awkward. 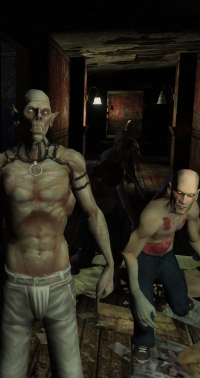 Start playing, get through tutorial, get overwhelmed, put it down, feel guilty, restart…

The worst thing that I can do for my ability to keep playing a game, I’ve found, is to reach a new area and then stop for the night.

In any game, a new area means new places to explore, new mechanics to learn, new elements coming into play, and so on.  That’s a lot of new stuff to learn about.  And it’s remarkably easy to get to the new area with the intent of learning tomorrow… only to find that when tomorrow rolls around, learning about all of this just feels more overwhelming.  So you put it off, until you forget what you were doing in the first place, and then it’s right back to starting all over and getting trapped in the same loop.

When this happens, the game itself isn’t giving you too little information, but you’re getting overwhelmed at the thought of having to learn and process a whole lot of new things in short order when you really weren’t expecting to do so.  It’s intimidating, it’s challenging, and it feels like it would be more work than fun for an extended period of time.  That isn’t the fault of the game being poorly designed – a game that just gives you the same area over and over with no variation is going to get boring in short order.  It’s just a matter of being challenged by not knowing what’s in the new area and quietly backing out.

Sometimes you just don’t have a clear picture of what the game is asking from you.

I did not like the fishing in Nier, but truth be told I was never going to like it under any circumstances; it’s a fishing minigame, after all, and I’ve said how I feel about those.  I might have liked it slightly more if the tutorial for how to fish was not kind of bad, giving a strictly accurate explanation of how to fish while at the same time being a pain and a half to actually comprehend.  The result was that I struggled to get the fishing quest done, ultimately defaulting through it, and then never looking back at it again.

Sometimes the real challenge in a game is that tooltips are not strictly unclear, but they don’t serve to give you an accurate picture.  Or they rely on understanding a bunch of interwoven game states that you don’t have an easy time internalizing.  Or the game is asking you to do things that, again, run counter to your instincts.  In Castlevania: Symphony of the Night, Poison reduces the damage you deal rather than dealing damage over time; perfectly sensible and reasonable, but completely counter to what you might expect from a lifetime of playing these sorts of games.

In other words, sometimes what’s making this harder isn’t the game itself, it’s you.  It’s that rare situation where playing years of games somehow makes you worse at a new one, because you’re trying to fall back on learned reflexes that are the wrong reflexes.

What’s the proper procedure here? Am I the reason our team will fail or are you?

Any community winds up having rules, and a lot of those rules are unspoken.  That’s normal.  What becomes problematic is when those unspoken rules that most people aren’t even aware of wind up getting so codified that breaking from them is seen as a form of rebellion or malice.

Case in point – in my youth, it was an accepted practice when my friends and I played a brawler that whoever had the lowest health was entitled to pick up the healing items that showed up.  If another player picked one up, it was a mistake, not intentional.  When I moved and got into a new circle of friends, it was just as accepted a practice that whoever got to the item first was entitled to it, even if they were less injured.  Neither version is right or wrong, it’s just a different form of social convention.

Arcades fostered a lot of these, to the point where every region would have its own rules about who got to play next after one player’s session was concluded; in some places it was desperately rude to feed in another quarter while other people were waiting, in others it was accepted practice.  Similarly, in online games there are usually kill orders that are not strictly necessary but are accepted, or certain stats you’re expected to boost and the like.  It’s rarely an attempt to exclude players so much as a deep-seated assumption that makes explaining it unconscious.  You wouldn’t tell someone not to stab themselves in the hand with a fork; you’d assume it’s the default.  Same principle at work.

Next time around, I’ve spent a lot of time talking about pretty much everything else, so let’s discuss what makes for a good challenge instead of a bad one.  After that, I want to look at puzzles and where they cross from being challenging to just plain frustrating or annoying.