Demo Driver 8: Among the Sleep 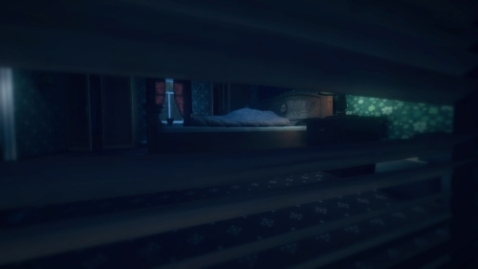 Standing here, with sounds coming through the house, not sure where your mother is, the world too dark to make out details… that’s scary.

At a glance, Among the Sleep is two different games, one of which is brilliant and one of which isn’t.  Which is especially interesting as one of the games is only a game by the thinnest stretch of the imagination, and yet it’s the one I found more interesting; the demo lost me when it started inserting a bit more gameplay, which merited far less attention in general.

The premise of Among the Sleep strikes you as novel right from the start.  Your character is a two-year-old child, and it’s played from the first-person perspective.  And it’s a horror game.  More than that, it’s a horror game of the sort that you become immediately familiar with mere seconds after you start up the demo.  It is dark, you are young, and you are alone.  Bad enough in and of itself, but then your crib tilts over, you hear a crash from downstairs… and you can get out.  To find your mother.

Giving an adult a child as a player character is always a difficult prospect.  Adults and children have very different views of the world, very different fears, very different everything.  To the child, the worry is that there’s a boogeyman in the dark and he needs to get to his mother or he’ll be in danger.  As an adult, your worry is that something horrible is happening to his mother, she can’t protect him, and if he goes to her he will be in a lot more danger.

I should note that I’m using “him” as the pronoun here, but the demo, at least, makes no mention of the child’s gender.  It doesn’t matter.  It’s you as a child, helpless, scared, and unsure, while at the same time you as an adult know more about what’s going on than the child does.  Also less, however, as simply everything in the game is filtered through a child’s worldview, starting with your slow creeping path to the stairs to the first floor, where I heard muffled shouting and protestations… and I immediately felt sick to my stomach knowing what was happening downstairs.

Turns out I was wrong; those protestations are coming from your teddy bear, who needs to be freed from the dryer to serve as something of a combination narrator, guide, and tool.  This didn’t assuage my fear, though, because as I slowly crawled downstairs and tried to make my way to my mother’s room I found myself getting increasingly anxious simply on the basis of not knowing where the game ends and where the reality does. 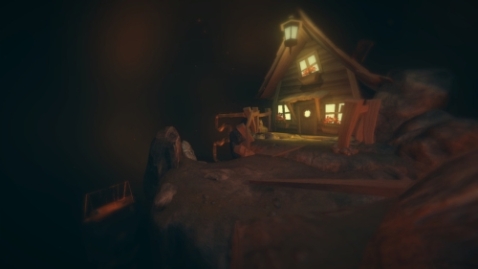 This, by contrast, was not scary. This was Outland from a two-year-old’s point of view.

Is this a world in which things really do go bump in the night and I am in imminent danger?  Is that not the case?  Is someone assaulting my mother?  Am I safe?  Everything takes on a different cast as you creep through the darkened house.  You see shoes, look up and see a hem, and you suddenly think you’ve found someone… but then you look further up and it’s just a coat with boots beneath it.  You’re relieved but still scared.  You don’t know where the boundaries are, just that it’s dark and something isn’t right.

Then I picked up an item and had to search around to solve a puzzle in an obvious dream space, and my entire affection for the game took a sharp nosedive.

Don’t get me wrong, I get it.  I recognize that as much as you can wring out of a game in which you chiefly wander around and look at things, that’s a hard sell to anyone.  But at the same time, I didn’t find myself wishing I could have more of an impact while playing The Rapture Is Here And You Will Be Forcibly Removed From Your Home, because the powerlessness was the point.  It was a mood piece, it was always meant as a mood piece, and the mood was made stronger by the fact that you knew as a player that you were running toward some nebulous outcome.

Yes, I knew objectively that nothing appeared to be stalking me in Among the Sleep.  But I still found myself crawling into the kitchen island cupboard and shutting the door behind myself, because I was scared.  Because the atmosphere was enough that I stopped thinking about mechanics and started thinking about the fact that as a child I was scared, and as an adult I was scared for him.  I remember sitting there, weighing the choices in my head, knowing that I would be easier to find if I was stationary while also knowing that I was safe if no one looked here, thinking of all the harm that could befall a two-year-old… 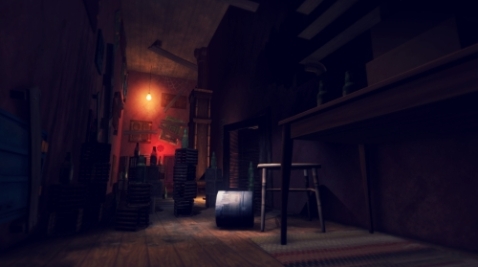 It’s a rare game that can manage to blend childhood obliviousness with adult concerns without having either one come off as being inherently silly. That alone is worthy effort.

Turning the game into a redundant exercise in trying to unlock what’s actually happening through a series of puzzles that focus on getting an item and then clicking on a thing just takes me right out of that mood.  It reminds me again that this is a video game and I’m not in any real danger, and the worst that happens is that I get kicked back to a checkpoint.  And yes, I get it, the designers want the video game to be a proper video game, but somehow this move makes me less excited about seeing the whole story than I was before I had a hint of gameplay.

That doesn’t make me dislike the game, exactly.  I think it’s a fantastic premise, and when the game is on, it seems to be on at high gear.  It has a good sense of how to build up a slow, gnawing dread that you just can’t shake, and it manages the spectacularly difficult task of combining childhood fears with adult fears while never making one or the other out to be silly.  The one jump scare in the demo was perfectly used and served to underline the ambiguous perception at play.

I just wish the game had stuck with that all the way through.  Given my misgivings about the actual gameplay and the avowed statements of its short length, it’s a little harder to justify the game’s current pricetag, but checking out the demo is well worth it.  It’s a neat concept, and you may very well find the gameplay to be something other than jarring.  And those helpless scares are something else, I tell you what.