On the one hand, I appreciate that we have arrived at a point wherein a game that would not do well with any plot doesn’t feel the need to engage in even an excuse plot. On the other hand, I’m annoyed that a game can’t be bothered to even give me an excuse plot, so perhaps I’m just messed up.

When I was younger, I had a book report to write about a book that I didn’t particularly care about.  The one trick I hat was, well, an array of literary tricks.  So I used them.  I dove into my big bag of stylistic obfuscation and went nuts, dropping every bit of didactic deception into the requirements as I could.  By the end, I had four pages or so of book report consisting of a paragraph of information and a whole lot of flourish.

My teacher gave it back to me with a note that I had written something which served as the ultimate triumph of style over substance.  I think Splice would have given it a run for its money, though.

Splice, by the broadest definition, is a puzzle game.  By a more practical definition, it’s really a game of stylistic clicking that doesn’t mar the experience with things so superfluous as narrative or feelings or even meaning.  It’s a bit of distracted clicking.  But it’s very pretty and soothing clicking, which is probably worth something, even so.

Here’s the simple pattern of Splice – you find a collection of oblong lozenges marked as cells on your screen.  Clicking and dragging them allows you to move them around, but only to certain points.  They’re also attached in a sort of daisy chain fashion; grab the second cell out of a string of four, and the third and fourth cell will move along with it.  You have a limited number of repositioning attempts allowed to fit your cells into a predetermined pattern.  And… that’s it.

It’s simple enough that the game never really gives you any sort of tutorial, at least in the demo.  You’re thrown in and you hope things are obvious enough that you can make it work.

There’s no timer, there’s no score, there’s only the thinnest sliver of opposition inherent in the game.  Just nudge these things until they line up properly.  The demo even commits one of the cardinal sins that I have listed for demos – I cleared it in ten minutes, and honestly it would have been faster had I not spent much of that time thinking about pizza toppings.  (I was kind of hungry.)  And yet I don’t feel like giving it the drubbing that I gave Unmechanical, despite having the exact same failings – puzzles that are not, style over substance, simplistic gameplay, and a demo too short to even make a dent. 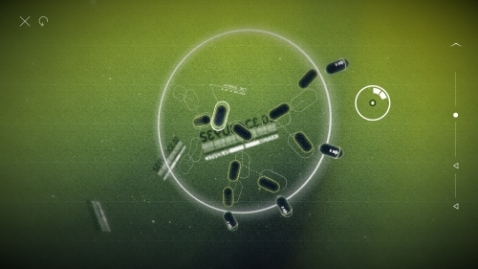 I suppose every puzzle is “make this work” on some level, but usually I like to at least know why I’m making it work.

Why?  Well, partly because it’s soothing.  I can see the game being very welcome for those who suffer from anxiety disorders, because it features gentle music, soft colors, and a very calming sort of gameplay.  You nudge pieces into order, and you’re not penalized or judged for not getting it the first time or the second or the tenth or the hundredth.  It’s flexible enough, at least in the early points, that it also avoids the dread specter of having a puzzle that appears to be wholly unsolvable.  I had to restart the last puzzle a couple of times, but I never felt like “damn it, what do you want me to do, you stupid game?”  It was just a question of figuring out how to work within the limitations.

The other reason is probably just the question of what style it’s aiming at.  Instead of being dark and brooding, it aims at being gentle, antiseptic, and warm, highly abstract and detached.  Which I like.  The minimalist look suits it, and the fact that the controls and the user interface are as minimal as possible contributes to that clean feeling.  There’s very little on the screen at once, just you toying around with cell bits until they line up into the proper shape.  Soothing, like I said.

Challenges do exist for those who want them, of course; there are some puzzles that can be solved in fewer splices than necessary, earning the moniker “angelic.”  Helpfully, these puzzles are marked out from the rest of the pack, so you don’t spend hours trying to figure out a three-step solution for something that absolutely requires four.

In this screenshot, the puzzle is unsolvable.

For the most part, though, I can see how this would be an excellent way for someone to gently unwind from anxiety or major stress with something soothing and calming.  Then again, at a $10 price point it might just slightly miss that mark.  Not that it’s a lot to spend on your continuing mental health, but I can see a lot of people passing on it simply because there’s not a lot going on other than just those simple, soothing puzzles.  I’m pretty sure Tetris can be acquired for similar or smaller amounts of money, and it provides much the same function.

Then again, Tetris is a game of competition.  This is a game about relaxing.  It’s only a competition if you want it to be one.  A philosophy used by a lot of Flash games to varying degrees of success, but something worth a few dolors if that’s something you need.  The same developer has also produced another couple of games which seem to have a similar overall focus.  Relax, enjoy, it’s minimal, you have no problems to worry about right now, enjoy the quiet.

Not to mention that the game can also be run in windowed mode right from the launcher, which is something I greatly appreciate from a hardware standpoint.

I can’t tell you how much the overall game experience will satisfy, but I can say quite comfortably that if you’re looking for an epic game experience at the ten-dollar mark, there are better ways to spend your money.  On the other hand, if you’re looking for something soothing and gently relaxing, this has real potential.  Maybe the later puzzles turn screamingly hard and the game suddenly imports a driving techno soundtrack that totally undoes everything nice I’ve said about the game, but I tend to doubt it.

That is, of course, a triumph of style over substance in and of itself.  But sometimes it’s all right to just be stylish.