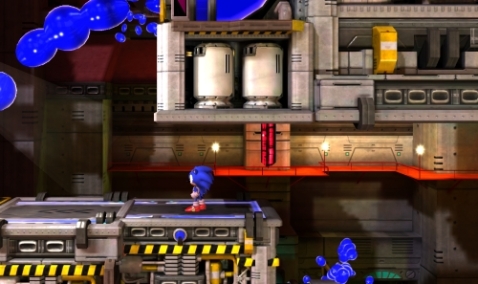 When a series resorts to mining out its past, it’s usually because the present is much less interesting.

As funny as that might seem at a glance, the fact of the matter remains that the weird fan culture has become the most relevant part of the Sonic the Hedgehog franchise in recent years.  Kind of understandably so, even.  The franchise has been showing cracks ever since the Dreamcast days, and the current state of affairs is lamentable but hardly unexpected.  At this point, making a new game is quite possibly not a good idea, and it’s definitely a hard project.

Of course, there are always exceptions.

Two games vying for one franchise

I really can’t say enough negative things about Sonic Adventure despite having years to do so.  The game clearly wanted to be Mario 64 no matter how badly the very concept of the franchise had to be assaulted to make that happen, and the net result is a game that feels somewhat peppy in places compared to that specific game but largely is just an ambling mess.  And I’d be completely content to write it off forever as a pile of irrelevant garbage if not for the fact that it does, in fact, have fans.

And not just one or two, either.  There are people for whom the Sonic franchise is chiefly focused around free-roaming pseudo-adventure play, which might not be true to the very rootiest of series roots but isn’t invalid.  There are a lot of games that play exactly like that, after all.

The idea of big stages to explore has always been a part of the games; it’s just that it’s usually been a part observed in passing as you hurtle by.  You practice, you try new routes, you eventually find the best way to race through the stage and pick up more awesome stuff like rings and shields and whatever trick Tails had in Sonic the Hedgehog 2 that made him totally invulnerable.  Part of what attracted me to the games back when they were universally side-scrolling affairs was the fact that they were functionally Metroidvania titles in overdrive, although I didn’t have that term at the time.

Any new title has to satisfy fans, but there are fans of two distinct gameplay styles.  Some fans like both, some like one and not the other, and the two are largely incompatible with one another.  Sonic Generations was meant to sort of work on this level, allowing elements of both styles, but it’s a hard balance to hit just right.  Especially when…

Speed is no longer a draw

From a design perspective, what made the original games stand out was the sheer velocity of them.  Mario moves at a more sedate pace, and that was considered more or less the proper default.  Then along comes a little hedehog blazing along at top speed and the stage whips by, and the whole thing just feels more energetic.  It was very novel to see a game that had downright huge stages without expecting you to slowly explore every nook and cranny; it certainly threw me for a loop when I first fired up Sonic the Hedgehog 2.

Cut to today, when platformers have pretty much taken that lesson to heart and set speed as the default.

So what you have left is the strength of the franchise itself, its unique mythos, and the characters that players have grown accustomed to.  But of course there’s a problem with that, too, because there always is.

The whole thing is a marketing move

Sonic the Hedgehog was a game originally created because Sega wanted a mascot.  The lead character was created specifically to be loose enough in terms of story and personality that he wouldn’t suffer from any sort of story issues in the transition from Japan to America.  If you want to know when the series sold out, the correct answer would be “prior to its creation.”  This was never someone’s passion project beyond having a passion for keeping one’s job.

In the abstract, that’s fine, but it also makes Sonic himself into a character tailor-made to appeal to a specific demographic from the 90s.  He’s meant to be flexible so that a team can plop him wherever they want without any issue.  If he were added to an existing series he’d be hated by fans, because he’s a collection of “cool” attributes piled together with duct tape and baling wire.

So any new Sonic game has some serious hurdles right out of the gate, and it’s never going to be as relevant as it once was.  When Sonic was a rival to Mario, there was a push to keep developing the series; these days, he’s all sped up with nowhere to run.

One response to “Hard Project: Sonic the Hedgehog”