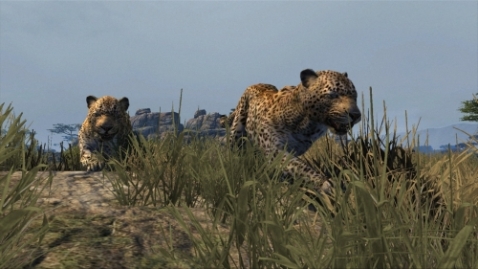 Will this be a game of stalking the stalkers, hunting the hunters, being at once the victim and the predator?

I generally like animals more than people, because even the most unpleasant animals I’ve known have never been pointlessly insulting or cruel.  Thus, I’ve always held on to a great deal of disdain for this particular game franchise – the idea that you would have a game solely devoted to killing animals in a hunting-but-not-really environment just seemed like behavior not worth encouraging.  If there was a game franchise devoted to injecting yourself with a whole lot of heroin, I wouldn’t exactly be on board with that, either.

But when I rolled this one up, I decided to keep an open mind.  I kill lots of animals in video games, after all, and maybe – just maybe – these games are actually awesome.  Maybe they manage to have a complex and realistic simulation of hunting without ever killing an actual animal.  Perhaps these are games for people who love the thrill of the hunt but would never want to harm a living creature.  It’s a long shot, sure, but it is possible that I would start playing and realize this franchise was better than I had given it credit for all along, with complex simulations of bullet physics and the effects you could have on your prey.

To start with, the title itself is a misnomer, since at least what I played of it involved a grand total of no actual hunting beyond shooting one antelope.  You press the right button to zoom in, then another button to hold your breath, because breathing makes your vision blurry or something, and then… oh, look, that’s helpful, the antelope’s vital organs are helpfully highlighted.  So, you know, shoot those.  The only way you could fail to get a perfect kill is via willful ignorance.

Your shot produces no blood.  The antelope just falls over and you’re told that you kill it.  There’s no dressing the kill, there’s no factoring in caliber or range or where you shot it.  I know it would have been far too much to ask the game to address the ethics of hunting at this point or the cost of using an animal for meat or fur or anything, but then the corpse just vanishes.  It didn’t get replaced by a smiling cartoon antelope holding up a sign that said “THIS IS A VIDEO GAME” but it might as fucking well have done so.

Like, seriously, if I drop money on a game about hunting I want to actually hunt.  When I bought Endless Ocean what I got was a game in which a whole lot of time was spent swimming around underwater in an ocean.  The game did not have you dive once and then spend fourteen hours dancing in a nightclub.

And no, you’re not hunting dangerous animals.  What happens immediately after you kill your lone antelope is basically a bog-standard shooter.  Walk down the corridor.  Leopards show up.  Shoot them or they hurt you.  But don’t worry too much if they do hurt you, because there is a health kit lying every five fucking feet.  Forget doing some clever shit like shooting a leopard in the leg to cripple it or anything along those lines.  Your enemies are endless bullet sponges and shooting a leopard twelve times in the foot is exactly the same as shooting it twelve times in the chest.

No, I don’t think locational damage is something that a shooter needs to include, but if you’re going to make a game about hunting make a game about hunting.  Let me wound animals and track them and carefully consider how I kill them.  Don’t just give me a leopard that can take four shotgun blasts to the head.  For that matter, don’t pretend you’re doing anything other than tossing Manheap Shooterguy in the savannah.

Soon thereafter, I came across some lions, and improbably things got even dumber.  First the game demanded that I either kill the male lion in one shot or the pack would attack me, and again I got that perfectly simple zoom-in bit with the antelope, making it “kill it in one shot” almost perfunctory.  Then the pack attacked me anyway, so the lie detector said that was a pile of bullshit.  Oh, and then another male lion showed up, and in the first nod the game has had toward actual realism he wasn’t any more durable than the two dozen other lions that I had already killed.

The game also engages in the same sort of shitty video-game arsenal crap that seems to think a shotgun is completely worthless firing at a target more than four feet away, which is emphatically not how real shotguns work.  After taking another few steps forward I fall down a ravine and deal with a bunch of crocodiles who can take three or four shotgun blasts to the face without dying, at which point I officially decide “fuck it” and just run past them.  There are health kits everywhere and they don’t even hurt me that much.

Then I have to fight a hippo as a boss fight.  Yes.  A hippo.  As a boss fight.  It has exactly one move, which is “charge,” and would be easily dodged if not for the fact that you’re fighting around a lot of tall grass.  Also, it seemed like all of my weapons did equal damage to the creature.

I’m serious.  A pistol and a shotgun both did the same amount of damage to a hippo.  I think this was around the time that I flipped a table, but I’m not entirely sure.

The other gameplay option I explored was a shooting gallery, which was even dumber than it sounds, as you wind up on a rail shooter trying to kill a bunch of animals with poor hit detection and mechanics that wouldn’t pass muster in an arcade circa 1995.  There is a third mode, but I neither know nor care how it plays, because at this point we’d be down to one non-shitty mode out of three even if it was grand, and honestly I have no faith in that happening.

Please spend the money you would have otherwise spent on this game on a local wildlife conservatory, or at least on a game that doesn’t condone the needless slaughter of wild creatures.

What we have here is essentially an FPS that couldn’t pass muster in any other way than by hastily adding in critters.  It fails to deliver on the bare minimum of what would qualify it as some sort of actual hunting game, which means that its one theoretical raison d’etre evaporates like a fart in the morning breeze.  So, no, these games just suck ass after all and we do not need them on the market.

See what having an open mind about this shit does for me.