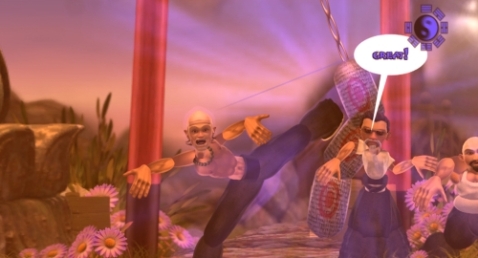 I understand that the spastic flailing is part of the intended charm, but that is not the selling point you may believe.

Being first is not special.  Or, more accurately, it is special to be the first to do something, but that alone does not somehow entitle you to a life free of critique or feedback.  Being first just makes you, well, first.  It’s entirely possible to be first and yet still be pretty damn awful.  You can probably gather where I’m going with this.

Rag Doll Kung Fu is the first non-Valve game to be offered on Steam, way back in the day.  That’s something.  It is also… well, it’s a game with an okay premise that wound up stretching pretty thin within seconds, and then it just sort of keeps going.  I know that I talk a lot about games that feel like Flash titles stretched out far beyond their breaking point, and this one definitely falls under the same header.  It also manages to somehow fail at that, though, which is very much to its discredit.

The story of the game is… well, you shouldn’t care.  Someone watched some cheesy movies and slapped them into a loose semblance of a story, and once again we learn the repeated lesson that never seems to be internalized: making something intentionally bad just means that you’re being bad with gusto.  Making something that’s so bad it’s good requires a fair bit of panache and a great deal of grace, neither of which the game has.  Instead of feeling fun, it winds up feeling disjointed and tedious.

“Disjointed” suits the game quite well anyhow, of course, since the whole premise of the game is that the characters are flopping ragdoll models that you must control with all the grace that implies.  Moving your limbs is accomplished by left-clicking and dragging, attacking by right-clicking and dragging.  Also, constantly swirl your mouse in a circular pattern to built up attack pips and chi while trying to grab the right body part for what you want to do.

Obviously, this is not a game wherein fine control is a thing; that’s the nature of the beast.  And that’s also where most of the challenge comes from.

Yes, flying through the air in lazy arcs, I get that. I know lots of games that let me do that. Reliably. On demand.

Herein lies the problem, Timmy – when you make your game difficult by giving it a difficult control scheme, you did not make your game difficult.  You just made it annoying to play.  And that’s what I quickly found was the problem with the game as I tried, for the umpteenth time, to coordinate a character into making a long jump that was in any way controllable or predictable or didn’t result in me flopping back to the ground awkwardly despite the fact that I was pretty sure I had done what the game told me to.

The problem, of course, is that it’s kinetics married with a need for specific controls.  Pulling off simple maneuvers isn’t so bad, but pulling off more complex ones requires you to be able to really fine-tune the position of a ragdoll character with lightning precision, something that’s far easier for a computer on the basis of, well, being a computer.  I felt as if every challenge I stumbled into had nothing to do with the game itself and everything to do with the method of control granted to me.

Sure, it has some charm, because ragdoll stuff always does.  We love watching models flop around aimlessly and have no illusion of control, yes.  But if you could only jump three times out of five because the controls in any other game were this wonky, you’d write it off out of the gate as a failed effort.  We expect our games to work, and when we’re wrestling with the controls just to play…

It’s not a game without its charms, certainly.  The style of the proceedings are going to be super appealing to some players, and there are some people who I assume have absolutely no problem dragging ragdolls around with perfect aim.  Likely professional Starcraft players, I imagine, those guys are insane with their mice.  For someone, this stuff is all going to make perfect sense.

But even then, the novelty is going to wear off fast, and you’re left again with a game that doesn’t have much to recommend it other than “try to control your character!  You can’t, can you?  Ha, you loser.”

This part, admittedly, looks more fun. Not enough to justify the time needed to get here, though.

This is where I say that it’s a Flash game.  It’s the sort of thing that could be fun to fart around with for a few hours on an idle Saturday evening when you just felt like wasting time.  As a cheaper title than it currently is, I can even see some people picking it up as a thing to screw around with on occasion, a toy vaguely dressed up to look like a game.  Instead it’s full-priced for a premise that wears thin almost instantly.

But that’s a hypothetical world and not the one we live in.  I mean, I can’t find it in my heart to hate this game or even list it among the most egregiously obnoxious games I’ve played for this feature, any more than I can bring myself to hate QWOP.  The difference, of course, is that the latter is intentionally made as a joking exercise in a game that does not want to work and bills itself as such.  This is a full game that wants you to pay money to deal with its frustrating mechanics, providing you with challenges that wind up coming down just this side of frustrating.

It’s a clever idea, and it’s possible you can find some enjoyment in it.  But it’s a historical footnote, and not a terribly good one.  If the best thing about your game is obtuse controls that have a certain charm to them, well, you haven’t made a very good game.