It’s super-nice how smart you feel after you successfully unwrap these after just a single try, though.

The central goal of Dynetzzle is to trick you a little bit.  Even beyond the obvious challenge, there’s the simple fact that you’re dealing with making a six-sided die every time, which has sides that add up to seven.  But that just plain sounds wrong.  You can’t get a seven from a single six-sided die without a marker and a willingness to vandalize numbered surfaces, after all.  It’s a little thing, but it’s just enough to throw you off your stride and force you to remember that the opposite sides always add up to seven.

Assuming you can work around that little mental block, it’s not a hard game.  It needs that block in there to trick you, essentially.

If you’re going to look at games as a series of decisions to make – which I’ve argued in the past – then you have to provide players with a reason to make those wrong decisions.  When you don’t have skill as a barrier (i.e. “I know what I want to do here, but I can’t manage it”), you sort of have to fall back on tricking the player into doing something they shouldn’t.

When you see “Tier 1” on crafting materials, it necessarily means that you know there are higher tiers still to come, and as a result you tailor your expectations.

Keeping information out of player hands is, essentially, a subset of this.  I’d used the example of finding a better sword than the one you just bought inside of a dungeon near the entrance; if you had known the sword would be there, you wouldn’t have bought one, causing you to spend resources on something that you otherwise would have avoided.  But what if you ran into that same pattern all through the game?

Sure, you’d miss it for the first few dungeons.  But if there was always a new sword just around the corner for free, you’d pick up on that fact and stop buying them.  It’s a pretty easy pattern to decipher.  That’s why a game with good design sometimes tucks new weapons in there, sometimes not.  Maybe there’s an upgrade hidden deep within the dungeon, maybe there’s not one hidden anywhere in there.  You won’t know.

If you look at the boss design of online games over time, you find that they teach you to do things with escalating consequences and changes.  In the earliest dungeons of Final Fantasy XIV you are taught that standing in AoE markers hurt.  That’s a lesson right there.  But then the game continues to play with those markers, because just dodging them isn’t exactly hard.  You always want to be out of them, after all.  So you have to be given reasons why you either cannot or will not move even when you see the marker there.

Super Mario Bros. teaches you to stomp on things as the solution to your enemy problems, then it gives you enemies you can’t stomp on.  But fireballs still work… until you run into enemies that are immune to fireballs, too.  It’s a forever escalating cycle that asks you to try one thing on the assumption that it’ll work, only to realize you have to do something different.

It’s easy to be frustrated sometimes when mechanics get deceptive, but that’s honestly one of the cornerstones of good design.  Batman: Arkham Asylum‘s goons are a prime example; once you understand the basics of the combat mechanics, it’s easy to take apart a group of normal goods in short order.  The knife-wielding enemies and the like are a necessity to keep combats from becoming boring, even though they also require more skill to dodge around and fight effectively.

That’s why when the enemies you can’t counter normally attack, they attack with a red version of the little “attack” symbol rather than the blue one.  The right response is to dodge, but the game wants to trick you into trying to counter and consequently losing health.  And if you’re inattentive – like I frequently am – you’ll keep falling for it and doing worse with the game as a whole, entirely by design. 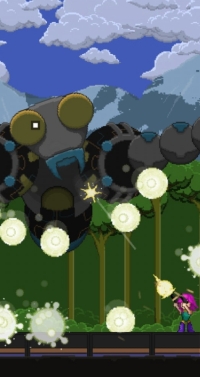 I have a pretty good guess of where I’m supposed to dodge, but I don’t know if I’m being herded there just before the kill shot.

Use of a different symbol might have made it more obvious, but it also would have removed one of the major skill checks of the game.  You have to recognize the difference and compensate rapidly.  The game is tricking me, but it’s tricking me in an entirely consistent manner.

Deception isn’t solely limited to tricking you into thinking something hard is going to be easy, though.  It’s also a tool for making secretly easy and straightforward choices look like the wrong one.  Enemies you’re supposed to avoid, rather than fight.  Gaps that have an obvious powerup on the other side that you simply can’t traverse until you have a later ability.  An entire dungeon in Final Fantasy IX swaps your attack power around, so low-damage starter weapons deal the most damage, but the game never tells you that outright even as the treasure chests yield the aforementioned low-damage starter weapons.

Part of getting better at games is understanding that every game has a series of optimal choices while trying to convince you that it doesn’t, no matter how many different options you have.  That’s not to say that games solely reward a single approach, just that there are best ways to go through any viable approach included.  If you specialized your character for stealth, it’s possible that the best option is to always avoid combat as a result, even as the game tries to trick you into getting into combat as often as possible with your stealth character.

When you understand that this is part of the game’s arsenal, that it’s a feature of design, you can start refining the way you play and looking at challenges in a more analytical fashion.  You know there’s going to be a best choice, and you know the game wants you to take a different option because that will make life harder for you.  So you can start playing the game a level above the norm, recognizing that the tricks are coming even if you don’t know exactly what they’ll be.

For the next outing here, I want to talk about AI, human opponents, and the idea of perfect play.  After that, I want to shed some words on rewards.