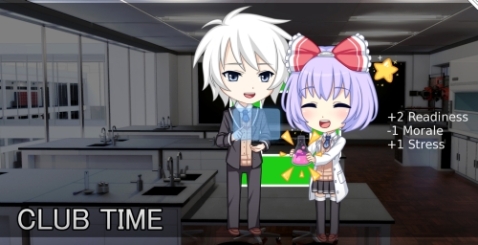 Stand back, we’re going to use science on it.

The weird thing about a lot of Japanese video game genres is how the fans who want to make more of them want to make the same exact sorts of games you got in Japan.  Don’t get me wrong, the visual novel/dating sim sort of game never really took root in America, it’s a uniquely Japanese genre.  But instead of taking that framework and making something new out of it, it seems like the fans making new games in the genre are just… making games that are trying their hardest to be Japanese games, complete with cultural references and behaviors and the like.

I bring all of this up because I am relatively certain that the developers behind Sunrider Academy are not located in Japan.  Not entirely certain, but there are little bits and pieces hither and yon that suggest the game was made by enthusiastic fans emulating Japanese games rather than people just making a game about what they saw/experienced/etc.  That isn’t a negative verdict right off the bat, though, just a piece of the puzzle.  As it turns out, the rest of the puzzle fits together decently.

Let’s start by unraveling the backstory, though, because there is some.  Sunrider: Mask of Arcadius is a freeware visual novel/dating sim/tactical robot combat game that was Kickstarted and is available on Steam right now for free.  If you want to play the captain of a starship sending robots into battle piloted exclusively by cute girls with the hope of eventually seeing some boobs, well, here you are.  Sunrider Academy, meanwhile, is the same cast (almost) set in a science fiction setting… that boils down to “Japanese school but it’s the future to file off rough edges and deal with weird timeframes.”

Yes, it’s the writers creating their own high school alternate universe.  DeviantArt has officially devoured itself.

The characters are a bit truncated from the original game, with only four of the girls showing up in the game as planned romance companions, but the point remains.  Instead of taking part in a galactic war, you’re dealing with teenagers sorting out club issues and eventually doing the nasty.  Specifically, your job is to bolster three failing clubs foisted off on you by the student council president, each of which is run by someone with only the vaguest grounding in reality.

The alternative is that the usual dating sim girls you encounter are, in fact, 100% true to the sort of people you find in Japan. Which would mean that Japan is horrifying.

Thus, to the great surprise of virtually no one, your gameplay comes down to recruiting for the clubs, managing your money and stress levels, raising your stats to succeed at various tasks, and so on.  It’s all the sort of thing that you have probably seen in these games if you’ve played them before.  Your ostensible goal is to have an impressive school year, which means you need to rescue the three failing clubs and have awkward, halting teenage sex to impress your kid sister.

My assumption is that she does not watch, but I don’t know that for a fact.

As much fun as I’m having making fun of the premise – and I won’t lie, it’s fun – the strength of this sort of game is going to come down to the art, the writing, and the pacing.  It has to convey the right feel and provide characters you want to romance and see succeed.  Which the demo does largely accomplish, even if it falters in certain areas.

Broadly, during each school day you have a block of time for club activities, then for doing whatever you want after school.  Work and class raises your Stress level, which has adverse effects, but they also can reward money, stat boosts, and so forth.  Meanwhile, the club work requires you improving the club morale, recruiting new (faceless) members, and improving the club’s overall readiness to compete for the glory of the eponymous academy.  Improving readiness drops morale, dropping morale can lead to losing members, you get the idea.  Boost the stats, come in at a higher number, get good.

I’m not sure how much effect Stress has on your character and the like, but the overall management is pretty good with just a few blind spots.  It’s unclear, at times, what effect your actions will have, which is a mark against the game.  Yes, it’s good that you can’t reliably find certain girls at certain places over and over, but it also means that you have to guess a bit at what responses a girl wants to hear.  You can also try to recruit or boost morale and wind up with no gains, which gets frustrating when you already feel a bit like you’re guessing at what does or doesn’t work.

And you can choose this before you know what any of it means, which meant that I had lots of money without realizing what I could spend it on.

Despite that, the game doesn’t have any tremendously hard gates for the first week (which is what the demo covers), so failures feel more like bad luck than an instant reset.  While the characters you deal with feel a bit like stock characters rather than fleshed-out individuals, they’re amusing enough to deal with, and they at least have personality beyond hair color, which is more than I can say for some other games.

And, you know… it’s sort of fun.  Sure, it’s not the most original thing going and it has shades of the inherent weirdness you’d expect from a game trying hard to emulate another culture without any of the grounding necessary, but those missteps don’t serve to diminish the fact that it does have a not-insignificant amount of charm.  The lack of dialogue choices early on and the dearth of early understanding is the sort of thing that can be compensated, especially as you can skip replaying dialogue when you’ve seen it two or three times before.

There’s also the fact that the protagonist is the least likable of the bunch, but I think that’s kind of the standard.  Still makes me wish for more options, but here we are.

It’s worth noting that as of this writing, the game is still in early access, and only one of the leading ladies has a romance route finished and available.  This is actually heartening – compared to a few of the other recent Steam releases in the same basic vein, focusing on the core first and developing the romances over time makes it clear that the focus is on gameplay and storytelling rather than a thinly veiled delivery vehicle for boobs.  (The Steam version, by default, has no boobs; a patch is available if you really cannot complete your life without them.  You get the idea.)

So, Sunrider Academy, then.  Perhaps a bit too consciously deriving from Japanese games and not defining all that much of its identity, but the demo got me interested in the preceding game, and that’s something.  It serves as a decent substitute to Persona 5 until that finally arrives, at least.