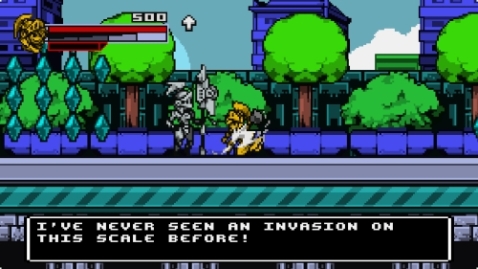 You can set up how many visual effects are on screen, which can make this cleaner to read as necessary.

What bothers me about “retro” games so often is that they miss the entire point of the exercise.  The games that I played as a child were not in any way, shape, or form undiluted masterpieces; they were products of their time as surely as anything.  Too often retro games wind up treating the entirety of these games as religious experiences, as if every single element was equally important in making games fun and you can’t have a truly fun game without a whole pile of obscuring and unpleasant tedious components.

In theory, you can do better.  You can take the parts that did work, the genres and elements that don’t really make it in the triple-A marketplace these days, and get rid of the tedium and missteps.  Cut out the spirit and pull that forward, but leave the bones where they lie.  Separate the platform and the moment from the overall experience.

The Joylancer: Legendary Motor Knight is close to what I’d consider a prime example of how to do exactly that.  It’s not entirely there, and some bits and pieces are unlikely to change before it moves from Early Access to an actual launch.  But even those broken bits aren’t broken enough to make it an exercise in tedium.

Further credit where it’s due, the lady lead has a very nice design.

Here’s the biggest problem that the game has – it’s still trying to emulate the two-button control scheme of the Game Boy.  Which makes sense as a stylistic homage only so far as it does not interfere with your ability to control the game… and here it kind of does.  Not too badly, but a little bit.

The Game Boy did the best it could with two buttons; ditto the NES.  Logic and experience would dictate that there is an upper limit on how many buttons you can put on a pad before it starts feeling cumbersome; I think the DualShock/Xbox 360 controller is more or less there, possibly going slightly over.  (Pressure sensitivity was far more touchy than it needed to be, for example.)  But Joylancer feels as if it’s the sort of game that would be greatly served by making use of four face buttons or a couple of extra control methods.

Credit where credit is due: while I get the sense that the controls were not fully explained by the tutorial, much of that likely comes from the fact that the controls are not fully done.  I believe that there are meant to be more movement options in the future and at least one stage seems to be mean to use exactly those options, but right now you just don’t have the fine control it requires.  And the tutorial currently in place is a meaty affair, carefully outlining every aspect you could want to know and giving you space to try these elements out as well.  (The option to return to the main stages could be better highlighted, though.)

A lot of your tricks relate to the eponymous Joylance, the weapon of the Motor Knights and essentially a combination of motorcycle, lance, and jet pack.  It feels a bit limited right now, but the idea is really keen.  Your attacks and several of your movement options make use of the Joylance, allowing you to move faster, jump hither and yon, ride rails, and so forth.  All of this requires energy, which can be acquired by picking up the crystals that line the stage or dropping into a defensive stance to rev up your Joylance.  There’s also a system of cancelling, using your lance to interrupt and rebuff attacks, and so forth.

Whilst it has issues, the core is still solid, and I think with a bit more development it’s going to be a real joy.  Attacking and movement both draw from the same well, which means that you’re thinking of both in concert and your attacks are also movement tools.  While I find the depletion of your little “burst” gauge a bit obnoxious at times, it does make for a good management tool; you cannot burst left and right with nary a care in the world.

Story-wise, it’s a pretty straightforward tale of “we want a thin excuse for main character Joy Lantz to smash things.”  Yes, that’s her name.  Thankfully, it reads less as an attempt to be “so bad it’s good” and more as a quick glossing where the fine details of the plot aren’t important.  It’s a straightforward romp. 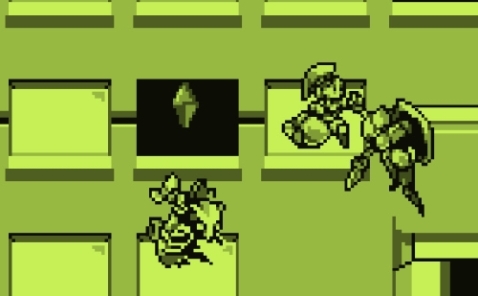 The tricks used to make sure the whole thing still works in grayscale/sepia are well-worn, but reliable.

What’s hard to tell, here and there, is where the lack of pointers is intentional as an homage or whether it’s just sloppy.  It’s not always clear when contact with certain enemies, especially bosses, will hurt you or not, which made the first boss way harder than it needed to be.  Certain jumps seem to be almost impossible, and I don’t know if I just haven’t figured out the controls properly or if they’re parts of the stage which are as yet unfinished.  There’s a vertical spring attack with counterintuitive timing and button presses out of your ground slide, and while it’s very useful it’s hard to use on demand, which some obstacles require.

Some of that is true to the source material, all of it is obnoxious.  And I don’t know how many parts of that are intentional nods to older games wherein you had to guess at your invincible frames or if it’s just something not quite finished.  The perils of dealing with early access coupled with a love letter to games that had less than a boundless love for players.

Despite that, the game is pretty fun.  The majority of its controls are crisp and responsive, and enemy techniques are varied and fun to deal with.  Occasionally I felt as if I had been backed into a corner, but there were a minority of situations wherein that was inescapable and occurred without any real failure on my part.

So it’s not perfect yet.  But I think it has some real potential as it moves through its testing phases, and I’m encouraged by what’s here thus far.  It might not fulfill all its promise, but I imagine it’ll be a good enough ride on the balance.