Of course, Final Fantasy V doesn’t have the allure of Final Fantasy III as forbidden fruit, since it was the first of the three unreleased games to make the official jump to North American shores.  Ironically, this took place long before its obvious inspiration came out here.  Final Fantasy V is a pretty direct spiritual sequel to Final Fantasy III, you see, in both terms of story and mechanics.  It’s also a game that kind of relies on a knowledge that Square was pretty certain most players just didn’t have, which wound up killing translation on the vine and led to a completely different game.

It also corrects Final Fantasy IV‘s longstanding lack of quirky minibosses to like.

Final Fantasy V, on the other hand, kind of did rely upon players understanding what the Job system was and how it was meant to work.  Because the core system is meant to address a weird point of Final Fantasy III.  You could have a character in that game who had spent almost the entirety of the game in physical jobs, and then switch that character to a magical job… and short of needing to level up your new job and pick up spells to equip said character, there would be no functional difference.

All right, that’s not entirely true, you’d get a few extra points in stats here and there by leveling up certain classes… but that’s not the same as having all those physical warrior skills carry over.

So Final Fantasy V is is meant to address that.  Spend time as a Warrior?  You learn a bunch of Warrior skills that you can place on whatever class you use next.  In theory, you could take a mage and give them shades of a physical attacker or vice-versa – or find a skill from one job that perfectly supports another job despite the fact that they’re seemingly from completely different sides of the coin, giving a physical character a magical support command or the like.

In practice, yes, it still pretty firmly locks characters into one role or another.  But the idea was keen, and the whole idea of the job system has wound up getting re-used with this wrinkle time and again.  When the game launched, however, Square was pretty firmly of the mind that you couldn’t get that modification unless you already understood the core conceit of the job system from Final Fantasy III.  As a result, the game almost came out here but never quite managed it, and it acquired a reputation before it finally did get released on the Playstation.

I tell you, it’s going to be nice when every single game description doesn’t wind up spending a few hundred words discussing the tortured release history.

So with all of this in mind, let’s start in on the Advance version of the game, a re-release that updated with some system changes and a bonus post-game dungeon.  Despite all that, it’s visually much closer to the original games on the GBA; I elected for that rather than the smartphone port based lately on the fact that the “redone” graphics on the smartphone version are, honestly, a lot uglier.  Nostalgia, ho!

“Bye, Dad! Have a good day at work, try not to die in a sequence of events that might end the world!”
“Honey, you don’t have to say that to me every morning.”

The story opens off in much the same manner as the original Final Fantasy plot, with four characters visibly reacting to the sudden changes in the world.  The King of Tycoon sees the Wind Crystal shatter in shock, and the rapid back-and-forth cuts do a good job of making things seem dire.  Something’s going on, but it’s not clear what.

We then jump to some loser by a fire with a bird who rushes toward a meteor after hearing it land.  I stuff down a momentary twitch at the thought of another meteor after the two million in The After Years.  Inside the meteor, the main character sees monsters attacking a girl, then jumps in to help.  He introduces himself as –

Wait, no, that’s definitely not –

I meant to type “Kain” but this works too.

Anyhow, Bartz meets Lenna, they both meet the amnesiac Galuf, and I’m struck by how organic the dialogue feels.  It’s not perfect, but compared to the stiff deliveries and broad-strokes personalities of Final Fantasy IV, it’s a breath of fresh air.  Lenna is headed for the Wind Shrine, and Galuf immediately opts to go along.  Bartz, on the other hand, hasn’t got any investment in the goings-on, so he bows out of what is obviously the main plot.

To no great surprise, Bartz’s bird Boko is upset with this turn of events, and after treating his chocobo as a morality sounding board for a moment, Bartz realizes that he should probably go help the girl and the old man.  The valley they’re all in starts collapsing, he swoops in to serve as the cavalry, and the group discusses their options.  Obviously it’s not possible to pass the meteor, which makes travel more difficult, but Galuf and Lenna are determined, and Bartz just wants to keep wandering.

To the north, there’s a cave, and at this point the game basically doesn’t have a battle system – everyone just attacks over and over, there are no inherent abilities.  A bit boring, really.  After a bit of trekking the group notices a pirate using a switch to enter a door, then spies a ship sailing despite the wind being almost dead, prompting questions.  The group sneaks into the pirate hideout ahead, Lenna suggests just asking the pirates for a ride, and both Bartz and Galuf say that it’s a bad idea… at which point Galuf suggests stealing the ship from the pirates.

For some reason, they go with that plan, which results in immediate capture.  Lenna tries to bargain her way out by mentioning that she’s a princess, and that works about as well as you’d expect.  Faris, the captain, tosses the group in the brig with eyes on ransoming Lenna.  Then we see Faris contemplating a pendant Lenna is wearing as the group converses overnight, which matches his own pendant, and in the morning he orders the trio untied and a course set for the Wind Shrine. 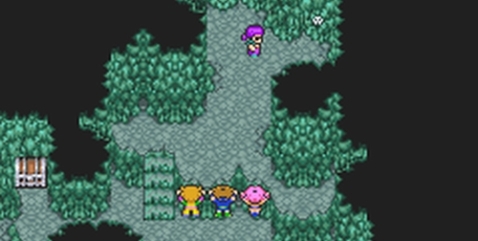 The Goonies it ain’t.

Faris and his sea-serpent-powered ship (yes, that’s how it’s moving) bring the group to the first real dungeon, unless you make a side-trip toward the first town along the way.  Tule holds a few items, a couple of stores, and a minor cutscene with Faris that implies both of the gentlemen in the group saw something whilst he was sleeping.  It’s… odd, albeit less so if you know the secret Faris is hiding.  I’ll play along for the moment.

Once you actually get yourself up to the first dungeon, you meet the King of Tycoon’s entourage who aren’t willing or able to head up to the top for their king.  A bit of exploring and the group faces the first boss, which uses the same “defensive posture, don’t attack now” mechanic you see in many first bosses.  Since the game still lacks any actual battle mechanics beyond the attack command, it feels appropriate.  Up another two floors, and there’s the shattered Wind Crystal.

Before the group has time to mourn at all, the crystals flood the party with their essences – flame for Faris, water for Lenna, earth for Galuf, and wind for Bartz – and King Tycoon speaks up.  The group has now been chosen as the Warriors of Light, and the crystal fragments empower them with the knowledge of the heroes of old, meaning that we’ve got our first six jobs!

We also see now how the Final Fantasy III remake was doing an homage to this scene, which happened later, thus creating one of those circular homages that I like so much.

In short, the group has a mission and a purpose, and now we can start diving into the actual game systems with some gusto.  I’m left feeling pretty darn impressed, all around.  Yes, the game lacks some of the tricks that Final Fantasy IV tried to pull off, but rather than feeling unambitious, it feels as if it’s staying honest, not aiming at things it cannot actually pull off.  Perhaps I was just eager to be done with blue planets and moons; who knows?