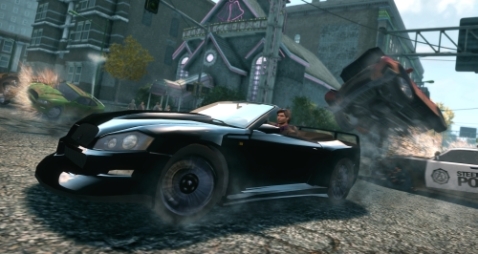 I’ll probably keep playing this game for a long time, even if I don’t have any more objectives to chase therein.

I remember when I stopped caring about getting 100% completion in a game, and I remember the game.  It was Grand Theft Auto: San Andreas, and after having done the hard work necessary for 100% in both of the previous games, what stopped me this time was nothing like a challenge too difficult or a mission too irritating.  No, it was a bug.

San Andreas consisted of three cities – Los Santos, San Fierro, and Las Venturas, functional stand-ins for Los Angeles, San Francisco, and Las Vegas, respectively.  Each one had little tokens you had to pick up throughout the city for 100% completion; so far, so good.  San Fierro asked players to take snapshots with the camera to imitate the standard San Francisco tourist.  Only one little problem emerged – I snapped one of the pictures, and it marked as cleared, but the completion wasn’t noted by the game.

Getting the shot opportunity back was impossible.  Going back to an earlier save was impossible.  Just like that, the game had rendered 100% unreachable no matter what I did.  And I was angry at the time… but then I realized that the game had kind of given me a blessing by freeing me from crap I didn’t really want to do in the first place.

I’ve mused a lot on when you’re allowed to stop playing a game, starting with the very first subscriber piece for this site.  Hitting that fabled 100% mark, of course, seems like a fine place to stop; once you’ve seen that, you have by definition seen all there is to see in the game.  You completed it.  Completed a hundred percent of it, even!  That should be enough, shouldn’t it?  There’s no need for more elaboration once you’ve passed that boundary; everything left to be done is mostly just fussing about, possibly with new toys.

But let’s take a step back and look at San Andreas again.  Why was I taking those pictures?  I didn’t feel any emotional attachment to this region, certainly not like the attachment I had felt to the cities of the previous two games.  I wasn’t saving the pictures.  I was doing it because I wanted that 100% completion, even though the process of getting there wasn’t something I cared about.

Now, if it had involved more blowing up robots and Commander Shepard, yes, I probably would have kept snapping those photos.

Shouldn’t that be inverted, though?  If I clear every conceivable bit of content from a game, shouldn’t that be because I like the game so much that I just don’t want to stop playing?  Instead, I was clearing stuff in a game I didn’t find fun because it was there, on the premise that I hadn’t really beaten the game unless I made that little bar go all the way up to 100%.  Unless the game told me that I was totally done.

On the one hand, the reasoning here is obvious.  The programmers spent a bunch of time making this game and they want me to engage with the whole thing, which is a defensible stance.  I would hate for someone to see a fraction of my work and then make a judgement on the whole thing, something which has happened many times over the course of my career.  Giving players extra incentive to dig deeper and take part in content that they would otherwise skip is an understandable course of action.

Yet it’s also really backward.  It speaks to the idea that you need to complete everything to really evaluate a game, which is kind of toxic in and of itself.  If you drop a terrible meal on my plate, I don’t need to eat the whole thing before I can say that it’s bad.  And if I’m not having fun in your game for the first three hours, why in the world would I sink more time into the game to see if maybe everything comes together later?

San Andreas, of course, does not fail this test.  I did enjoy the game.  What I didn’t enjoy was the busy work, the side stuff that had nothing to do with what I originally bought the game for.  Stunt jumps, snapping pictures, Vigilante missions forcing you to drive around in a police car that would go zero to flaming in less than a minute… this stuff wasn’t fun.  It was added in either because one of the developers thought it was fun and I didn’t agree, or just to show that the people programming the game had done the hard work necessary to make all of that work… but none of it was what I would call fun.  Just present, and functional.

Tying a percentage to it, though, makes it feel like a core part of the game.  It creates the message that you’re missing something if you avoid it.  It validates the content.

“Just wanted to pop in to let you know that you’re enjoying the game correctly. Way to go!”

I think, though, that this creates a kind of unpleasant and unhealthy feedback loop.  Instead of creating a situation wherein we clear all of the content that looks fun to us, we’re made to feel as if we’re slacking by only clearing a fraction of the total content available.  Completion is the metric that matters, and that means tracking to every corner of the game for mindless busywork, even if you have no interest in bothering with any of what’s out there.

When I think of all of this, I think of what Guild Wars 2 did with its daily achievements.  At the game’s launch, there was a short list of things you could (and should) do every day to unlock rewards.  All well and good, but the daily achievements meant swinging between several different sorts of content, some of which players didn’t like doing, some of which was actively opposed to what you found fun.

So the designers stepped back and changed things up.  Instead of daily achievements being a fixed list of things to accomplish every day, it became several tracks that you could focus in on, and doing enough on any one track – or a bit on multiple tracks – would get you your rewards.  Sure, if all you wanted to do was PvP you’d have to do a lot of PvP in order to unlock your rewards, but if that was all you wanted to do you were going to be doing that anyway.

We have to find a way to divorce 100% completion from being done with the game.  Because the two are not linked, when you get down to it.

This is not, chiefly, a design problem.  Sure, designers are the ones who put a bar in place to tell you exactly how close you are to being completely finished with a game, but that’s sort of the nature of the beast.  Few games explicitly tell you that you should be completely filling that bar or you might as well not be playing the game.  That’s something we do to ourselves in our rush to feel like we’re experiencing the whole game.

You should not feel broken when trying to get back into a game.

It’s understandable, yes.  When a new game sets you back $60, you want to feel as if you got $60 worth of content from it, so that means hunting out the little side areas and finding all of the various secrets.  But if you find those secrets and don’t find them fun… you really shouldn’t be expected to find all of them just for your enjoyment to count.  You cannot and should not tie the validity of your experience simply to finding the right number of assorted gewgaws.

Playing Dragon Age: Inquisition, I happily tore my way through a lot of sidequests and objectives off of the beaten path, clearing map objectives and quests with fervor, working hard to uncover all of the various landmarks in the game.  What I didn’t bother with were several of the requisition missions, because those offered rewards I didn’t need and weren’t fun to do.  So I ignored them.  There are regions which I still haven’t technically fully explored, because the conditions for doing so aren’t fun.  Again, not doing that.

Going on a hunt for all of the various achievements in Remember Me didn’t sound like fun, so I didn’t.  A multiplayer shooter arena wasn’t the reason I had bought Transformers: War for Cybertron, so I didn’t take part.  (Or I did, briefly, and then immediately regretted it.)  I still occasionally have the urge to go tool around in Saints Row the Third despite having cleared literally every meaningful piece of content from the game, because even if I don’t have objectives to hunt down sometimes the game can just be fun to play.

Knowing that we’ve cleared every part of a game is a nice achievement, but it should be reserved for the games and achievements that we either enjoy or at least do not find actively awful to play.  The sole metric for completion cannot be hitting that all clear mark, because it creates unrealistic expectations and forces us to make our games into chores, things we have to clear because that’s what’s expected to hit that coveted 100% mark.

This article is a Patron-funded piece, outside of the usual schedule.  If you like what you see, take a look at the Patreon page; you can fund an article yourself and get access to bonus articles.

One response to “Fundred percent completion”