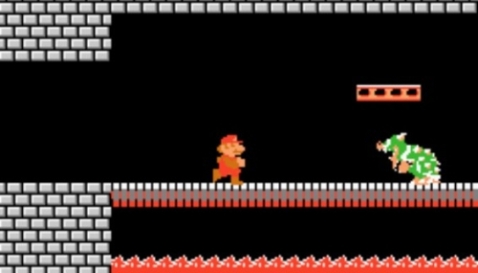 I will go to my grave hating those damn squid. That’s the sort of experience these water worlds engender.

I’ve mentioned in the past that the Mario series in general move slowly, and nowhere is that more evident than in Mario’s normal stride.  He ambles toward danger, really, moving at a quick enough pace without being particularly fast.  He gets faster when you hold down the run button, sure, but Super Mario Bros. is a pretty slow game, and it’s limited to one vertical plane the majority of the time.

Naturally speaking, the game is set up to reward you going through the level as slowly as possible.  You can’t scroll backward in the original game, so it’s to your advantage to test every brick to see if you can break it or if it contains a powerup of some sort, even just some coins.  But that timer pushes you forward.  Having a time limit means that idly waiting is no longer a useful trick; you both need and want to move forward at a reasonable pace, as otherwise you’ll find yourself killed by the countdown.

That central tension contributes a lot to the gameplay.  Each individual stage actually gives a fair amount of time to clear it, so it’s not like you’re really constantly racing the clock, but at the same time you are.  Later stages play with this a little by giving you mazes to explore, making you very aware that every moment spent trying to figure out the right route brings you closer than ever to unavoidable death.

Its other brilliant mechanical element is the power-up system.  Picking up a mushroom makes you get larger, presenting a bigger target but allowing you to break bricks and survive a hit.  A fire flower lets you throw fireballs, which can take out most enemies immediately; again, a hit knocks you back a step.

The result is that it creates a solid dynamic where you are more and more powerful offensively, but also in greater danger.  Everything in the game can be completed while you’re still small, but you’re much more vulnerable then.  On the flip side, you’ll have an easier time killing things with fireballs, but you’re also just one slip away from losing that tool and possibly putting yourself in an untenable situation as a result.

Incidentally, I think the later games in the series lost something when they stepped away from making powerups be tied to your health.  The 3D games just have a straight health meter, and Super Mario World outright made powerups distinct from one another rather than transitional.  One hit no longer seals away some of your abilities. 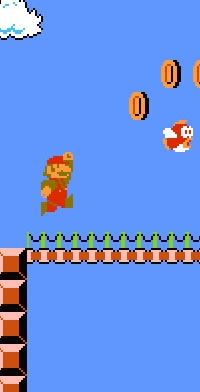 Admittedly, the later stages are fond of just throwing random crap at you over and over in random directions, but it’s predictable.

These two mechanics both play heavily into making the individual stages of Super Mario Bros. interesting and challenging.  You don’t get certain powerups in certain stages; there’s no way to sport a fire flower in the first level short of hacking or cheating.  The result is a stage that’s developed with the express intent of not letting you use that powerup, obstacles are put in place that you could navigate without a problem if you had a flower… but you don’t.  And the later stages of the game play off of that, giving you obstacles that become greater if you haven’t picked up and held on to a powerup long enough.

It’s easy to swim through water stages if you have a fire flower.  But as soon as you lose it, you’re stuck with nothing but a bigger character trying to navigate stages where you have no offensive capability.  And if you go in without one…

The game also plays with its basic assumptions as it progresses by giving you enemies immune to either fireball or stomping.  Never both; outside of static obstacles, nothing is completely immune to your ability to damage it, but there is no magic bullet for everything, and your tactics have to refine.  More to the point, these ideas get enough space to be played with while not being overbearing.  You’ve got enough space to understand what the Spinys are and how Lakitu works before the mechanic fades away; it’s only in later levels that it comes back, playing off of several other mechanics to make the final worlds a cavalcade of elements playing off of one another, challenges building and elements combining so that each new level plays similarly to those before without being identical.

Super Mario Bros. could be used as a textbook example of how to make level design work properly, not by creating too many widgets or odd parts but by carefully tuning the moving pieces in small doses.  It’s an example I use a lot not because there are no other good platforming examples, but because it serves as a perfect image of how level design can add to an experience.

Next time around, I want to talk a little more about personal responsibility in challenges, something I’ve touched upon before that still bears repeating.  The time after that, having examine a pair of games that succeed brilliantly at providing challenge, lets talk about games that failed to keep things challenging in various ways.