Despite my best efforts, these installments refuse to be compressed down all that much.  I apparently have had quite a bit to say about these games.

But let’s jump right back into the action.  After slaying two of the four Fiends and having noted that the remake has a different difficulty curve than the original game (or more faithful remakes), it seems that both the original version and the remake have once more converged upon the same spot.  Namely, the part wherein things become quite a bit more dull and slog-like than is entirely necessary.

By this point you have plenty of resources at your disposal and you’re not thrown into a pitched battle for survival every few fights or as a result of a lucky critical hit.  Most of the fights can actually be blown through pretty quickly.  The downside is that they’re almost constant and don’t offer you much of worth.  No useful drops are found, gil is functionally worthless (you’ve got enough to restock and no more shops to spend it in, so you’re taking in far more than you spend), and you wind up wishing to just be done with all the pointless random encounters.

Of course, there’s the matter of finding where those random encounters are supposed to be taking place.  Once you have the airship, it becomes a lot easier to go wherever the hell you want, which means that the designers had to find new ways to herd you down the right hallway.  The old method of “you can only go here” just won’t work.  This is accomplished mostly by making the last dungeon before the end obscenely hard to access, requiring two different key items and a third key item to get one of those items.  Yes, it’s kind of ridiculous.

Actually, it’s not fair to say that it’s hard.  They’re not difficult, just tedious to work through.

The Waterfall Cave exists solely for you to grab one of those key items.  An NPC tosses off an offhand reference to the fact that it exists, and that’s it.  Mercifully, it’s only one floor; unmercifully, it’s kind of a mess in terms of layout, and it’s where the game starts to really creep into slog territory because the encounter rate is astonishingly high and the battles are very tedious.

You also have to free a fairy to get down to the Water Shrine, but that’s pointed out pretty clearly and just requires a bit of running hither and yon.  Inconvenient but not absurd.

The Water Shrine itself mixes things up by starting you in the middle.  Your ultimate goal is the basement, but you also need to head up to the top to grab the macguffin that lets you speak the language of the last town in the game.  Again, the encounters become a slog, especially since the optimal tactics don’t change.  For my group, it was a matter of hammering on physical attacks with my melee characters while my White Mage used the Healing Staff to keep everyone’s health topped off.  No status effects to worry about, no major changes, just the same procedure over and over until they were dead or I was.  (Not that the latter happened.) 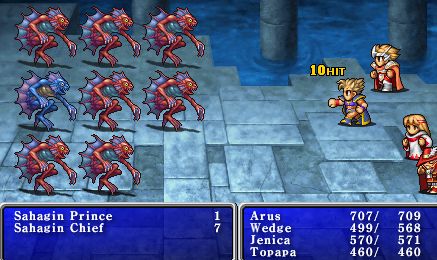 Over and over, back and forth, circles around circles.

I will admit, having items that cast spells when used in battle is a fun little element that the later games didn’t bring back.  There are one-shot items, of course, but it was kind of interesting when some pieces of equipment were valuable chiefly due to their associated spell properties.

Kraken was subjected to the standard boss routine, and since I picked up the Giant’s Gloves he got a particularly bad dose of Hasted Master beating his face in with extra attack power.  None of the fiends have been terribly challenging, but then, the game is built to reward quick burns and I made a party made for quick burns.  I shouldn’t be surprised.

However, after those adventures were done I had a problem.  See, the last and most powerful Level 8 spell is sold in the last town in the game, which is annoying to reach.  I didn’t want to make two trips, but my White Wizard hadn’t yet unlocked Level 8 spells.  What’s to be done?

Well, I figured, it’s high time to hit up the first of the game’s optional dungeons.

See, Final Fantasy is not a particularly long game once you both know what you’re doing and aren’t constantly on the bleeding edge of running out of your valuable resources.  So to pad out the length a bit, the Dawn of Souls remake added four additional dungeons, each unlocked when you killed one of the four Fiends.  These dungeons are semi-randomized – there’s a small selection of available maps that are randomly shuffled, each of which has a different layout and a different number of treasure chests therein.  There are also several powerful items inside, so you brave the random dungeon, fight a boss, and then leave with (hopefully) some nice treasures.

The bosses are particularly fun, though, because they’re references to things that haven’t happened yet.  Bosses from III through VI all show up in these dungeons, albeit usually in simplified forms.  You can only fight some of these bosses on a given run, however, not all of them.

The first locale, the Earthgift Shrine, is fairly tame.  It only lasts five floors, only has one really nasty enemy, and has a couple of fairly easy bosses.  So I ran through it.  Unfortunately I drew an awful lot for my treasures and wound up leaving with pretty much nothing of note, but I did get the level I needed to buy those level 8 spells.  More on the special shrines in the next installment.

Oh, and you can find some metal up here to complete a sidequest for a sword.  It’s hard to miss, but it’s a nice touch.

Mind you, I’m coming at this all from the position of someone who’s grown a wee bit cynical now.  When first playing through the game I found all of this terribly engaging and unique, and it really did give the sense that I was right on the edge of something grand and powerful.  Time has made me more accustomed to this environment, though, and since the party is a big fat crackling bag of power now it’s hard not to start tapping your foot.

Tiamat, the final Fiend, can theoretically be dispatched with a couple of instant kills, but she’s kind of a chump even without that trick.  She didn’t like my punching any more than her predecessors.  So next time I’ve got all the orbs filled with light, and that means it’s time to go… screw around in the special shrines for a while, for leveling and obscene degrees of power.