Challenge Accepted: The need for opposition 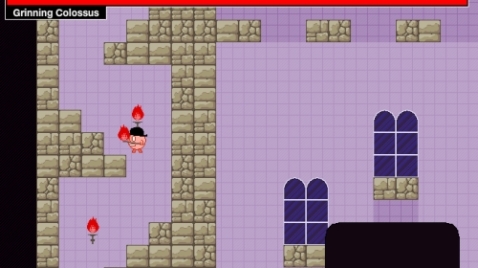 If games require challenge, why is this still obviously a game?

Defining games is difficult.  Yes, despite what one or two people like to claim in every debate on the matter.  You can argue a dictionary definition, but you can use the same damn argument to claim that the only real game is animals being hunted for food.  If it were simple to figure out what makes a game, there wouldn’t be any discussion on the matter in the first place.  (Spoiler warning: there is a lot of discussion, constantly.)

One thing we do agree upon is that there’s a need for some kind of obstacle.  A game isn’t really a game if it doesn’t give you a goal and then offer you impediments to that goal.  It’s at work in the very beginning of Super Mario Bros.  Your goal is to reach the far right side of the level, but there are enemies and obstacles in the way which can kill you and prevent you from achieving that goal.  It all seems very simple on paper.

But it’s not really that straightforward.  Very few things are. 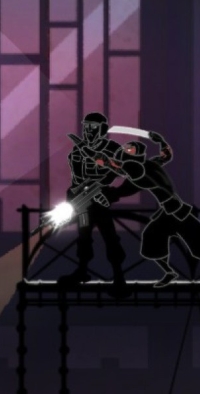 You are totally failing at the ninja-spotting challenge, guy.

Technically, yes.  If you’re red-green colorblind, it’s likely an almost impossible one.  But it’s still not much of a game.  Even if we have the red and green squares swap positions after each click, or move to random points in a predetermined area, it’s a pretty weak experience.  All of the pieces are there, but you would argue it’s almost not a game but the prelude for a psychology experiment.  Like if you found out afterward that every click of the red square electrocuted a puppy or something.

We feel no real opposition in this hypothetical situation.  It’s just a simple choice – click the red square or lose.

No, what we crave is something actively working against us.  That feeling that our goals don’t just require overcoming obstacles but working actively against or around something.

The Path is a game that I like to point to as a weird example of this in action.  By itself, it’s the ur-example of the Walk Around And Look At Things genre.  There are, strictly speaking, no enemies, and no matter what you do you will move forward and reach your end destination.  In theory, you have to look out for the wolf in his many forms, but the encounter with the wolf still happens almost entirely at your discretion.  People have argued about whether or not it even qualifies as a game, since you can’t die or fail or do anything other than explore the narrative.

This game could have a lot of stuff written about it. And it did.

But that’s the goal.  Your objective isn’t “survive a walk in the woods,” it’s “uncover as much of the narrative as possible, see all there is to see.”  You’re surrounded by an oppressive atmosphere, a slow and steady building of tension, the sense that you need to avoid the wolf when the first several times you aren’t even totally sure what the wolf looks like.  You’re wandering, lost, seeking more, trying to put pieces together into a coherent picture, trying to assemble a map in your mind, to find your way to where you need to go, but the path is not altogether clear.

You feel opposition, even though the real challenge is not in the mechanics but in ambiguity.

This is how adventure games operate, by the same token.  Your goal is reaching the end of the narrative.  Between you and that goal lie a series of obstacles which are overcome by clicking around, and in a lot of the more modern examples failure has more or less been removed from the equation.  Other characters will remain in place until you hit upon the right sequence of clicks and commands to successfully unlock the next tier.  You’re rarely in any actual danger, and a successful walkthrough can be remarkably bare-bones.  Click left, grab rake, grab basket, click north, use basket on beehive, grab rocket launcher, and so forth.

Here’s where we also get into interesting territory like visual novels.  These are even more bare-bones than adventure games, a series of still images with abundant narrative between the images.  Sometimes these are buoyed by a slender web of mechanics, but more often than not the game comes down to a matter of picking a series of choices.  They’re games in the same sense that Choose Your Own Adventure books were games.

Yet you still feel like they’re games, because you feel that pressure of opposition.  Your goals are stated and decided, in part, by the player.  What if you make the wrong choice?  What if you thought you were guiding the narrative toward its ultimate conclusion but in fact doomed everyone?  How many branches to the story are there?

Just like before, you’re functionally just choosing to click the red or green square.  But what makes all the difference is the sensation that you have not only agency but something to work against.  What’s in your path isn’t just the thinnest of obstacles, it’s the sense that you have a goal and something not just making that goal harder to reach, but actively working against your objectives.