Go kill the things down the hole, you jerk.

Sometimes a game’s biggest problem isn’t itself, it’s the market.  Which is really sad when just a few years earlier, you could have really been a contender.

Din’s Curse is a game very much in a familiar vein, plumbing the depths of the graphical roguelike that Diablo plumbed first oh so many years ago.  Just from that description alone you have an image in your head, I’m sure, and I’m going to tell you right now that it’s largely accurate.  Beyond that, though, it also does a good job of putting its own spin on exactly how class mechanics and the like work, and it was released at a time when the genre hadn’t experienced a big resurgence.

However, right now it’s in a field with Diablo III and Path of Exile and Torchlight II and Marvel Heroes and so on.  The net result is that a game which could have been a real charmer is placed up against a number of competitors that it just can’t, well, compete against.  Not solely by virtue of quality, but because its weaknesses show through. 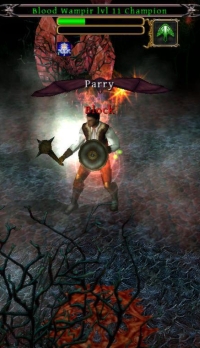 It’s what’s on the inside that counts. Unless, you know, there are plenty of options that look better on the outside and have almost the same thing on the inside. Then it gets a lot fuzzier.

Heck, let’s just get the biggest weakness out of the way right off the bat.  Din’s Curse is ugly.  Seriously ugly.  Still shots don’t really convey how ugly the whole thing is, because the whole thing looks blocky and low-resolution while also animating gracelessly.  There’s an awkward stiffness to every single model in the game, enemies wind up looking like indistinct blobs of polygons, and the graphics in general are just not attractive.  Compared to the games I listed above, which are at least graphical treats if you don’t like the play mechanics, and the ugliness is only magnified.

Mechanically, though, it’s got some real meat to it.  Right from the start you have the option of either playing one of the six fixed classes in the game (Priest, Warrior, Ranger, Thief, Wizard, and something else I’ve already forgotten but I am sure you have the idea) or going the hybrid route.  Hybrid characters only get to pick out two specialization trees compared to the three available to pure classes, but you have the entirety of those specialization trees open to you.  Want to make someone with heavy weapons and attack magic?  Go for it, the game doesn’t care.  There are also a lot of opening ticks you can turn on at character creation to make the game harder, ranging from the usual bits like Hardcore to some notable additional ones like Unlucky, Fragile, and Ego.  You even pick the pacing of the game and the level that the game starts at.

All commendable, all solid, all the sort of thing that long-time genre fans might enjoy.  And, I’m willing to bet, all things that various modders have brought to other games by this point, since they seem kind of obvious.  Heck, toying with class structures is nothing new; Titan Quest did it three years before Din’s Curse came out.

Mechanically, the game is solid but uninspired, sticking very devoutly to the usual pattern of “go down the hole, slaughter things, sell them back in town, repeat.”  There are elements like attacks on your central town by monsters that add an extra side of depth to the proceedings, along with the option to actually lose your game altogether if you let the town be destroyed, but you know that you’re in for a whole bunch of hacking and slashing.  The bright side is that the various abilities succeed at being impactful without being unbalancing, and you do have a satisfying sense of power as you swing away and crush rows of blocky foes amidst bland sounds of fighting.

Can we please have just one of these games without giant spiders? Just one.

I think they’re sounds of fighting, anyway.  Could be the sound of a kitchen being demolished by a badly behaved dog.  The music and sound effects are also uninspired, but that didn’t stick out nearly as much as the unappealing visuals.

Thing is, for a tiny studio which I imagine consists of three or four people, this game is not bad.  It’s very solid and eminently praiseworthy for how well it does work, and it’s clearly brought out of a labor of love.  So I have a great deal of respect for the people who worked hard to make this game a reality, spent time creating something, and pumped a lot of creativity into the game besides.  Sure, it might not be great, but back when it first released I would have said that it stood nicely in a neglected field.

Now, however, it stands in a field that is crowded to the point of choking on itself.  We’ve seen a huge spate of graphical roguelikes in recent years, many of them high-profile projects, and while a $10 price tag isn’t much, it’s a lot harder when it has to compete against some entries in the genre that are free from the word go.  You can argue whether or not games like Path of Exile are truly meant to be played for free, but it’s hard to argue that these games look and sound better, and the tiny size of the studio means that Din’s Curse comes across as extremely dated.

It’s a real shame, too, because the game itself isn’t bad.  Oh, sure, there are some questionable decisions and it’s still not a genre that I’m enthusiastic about, but the core mechanics still work quite well, and it will run nicely even if you’re running on an older machine that might not be able to support other games.  That, in fact, might be its greatest virtue – the pure simplicity of the engine means you can go ahead and run the game on a laptop with minimal hardware with no real loss in quality.  Or, if you’re desperate for more roguelike action, you can jump on in and start hacking and slashing your way through another deep, dark dungeon.

Din’s Curse, then, isn’t a bad game, it’s just a game in a previously quiet genre that wound up being released at the wrong time, right on the cusp of a bunch of big releases in the same genre.  It’s forgettable overall, but if you’re a big fan of the genre, I think it’s going to tickle you nicely.  Just be prepared for some unattractiveness.