The hills are alive with mist monsters and nurses.

I have a deep love of Silent Hill.  Part of this is due to being from New England; sleepy little resort towns being drowned by mists are less “unexpected horror” and more “standard window dressing” around here.  I am fairly certain I’ve driven through towns that could fit the description of the eponymous town with one or two details changed.

But that’s not the heart of the reasons, obviously; what I really love about the series is its slow, grinding, oppressive psychological horror.  It’s that sense of wrenching and grinding awfulness, the idea that you’re trapped in a town that is actively malevolent, wearing down your defenses and your sense of boundaries until you no longer know what you’re trying to do.  The whole thing just wears at you, player and character alike, leaving you with the slow rolling burn that’s so valuable in horror.

Unfortunately, the series has been faltering in recent years.  Silent Hill 4 started a downward trend, and of the four subsequent installments the only one that’s received fairly strong praise is the remake of the first Silent Hill.  So why is this horror franchise so difficult to keep alive, especially when it’s got some of the strongest horror games ever as a foundation?

Based upon regularly visited locations, Silent Hill has a hospital the size of Providence.

It’s not scary when you understand

Silent Hill and Silent Hill 2 both worked beautifully in part because the games never showed you what the heck was going on.  Oh, you could infer a fair amount, and you certainly could follow the plot without many problems, but you never understood the mechanics operating underneath the town.  Yes, you would periodically switch to dark version of town, and sometimes there even seemed to be unifying triggers for why you switched, but control of the hideous gears that ran this engine of human suffering was firmly out of your hands.  You didn’t understand what the town itself wanted, what malevolence fueled it – in the end, the only way to save yourself from Silent Hill was to get the hell out.

Silent Hill 3 revisited the town once again and really did look into what the hell was going on and how it could be understood.  And it worked quite well, partly because it showed that the effects of the town were spreading far beyond the confines of the mist-shrouded horror and partly because it still was filled with bracing horror.  But it also ran into the problem that every horror franchise faces.  Once you understand these mechanics, it’s just not as scary any more.

Dungeons & Dragons has a long history of doing this almost by accident, turning what could be a deep and interesting horrific creature into a collection of numbers on a page.  Part of what makes horror work in the first place is the fact that you can only grasp at straws to understand how everything works together.  The vast malevolence underlying the town gets less frightening the more you get exposed to it, simply because it becomes less about a town with dark forces seething underneath and more about how this new set of monsters ties into the existing cosmology. 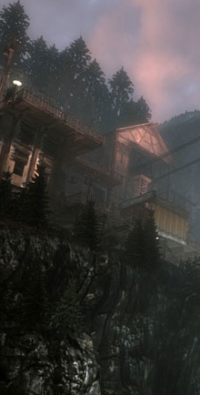 Each new game seems to make the place look less like a site of unspeakable horror and more like a vacation getaway.

I’ve never been fond of Resident Evil, but I do appreciate that the franchise has had to undergo a big crisis of identity over the past several years.  Because the genre that it kind of kicked off no longer really exists.

Survival horror was one of the many micro-genres that dot the landscape of gaming.  At the worst of times (and far too frequently) it amounted to a game that was horrifying because something jumped through the window at you, with the “survival” aspect relegated to “here are four bullets, kill seven zombies.”  At the best of times, though, it pitted you in a hostile environment filled with unfamiliar landmarks and gave you a desperate battle to survive and understand what was going on.  It was a child of adventure games and shooters in the same place.

It kind of had a limited lifespan, though.  Resident Evil has tried to weather the change by becoming more of a third-person shooter in which you shoot zombies.  Silent Hill, on the other hand, literally can’t exist without the genre.  The two are inextricably linked.

Silent Hill, for example, couldn’t survive as a shooter.  Combat in the games is usually slow, awkward, and reasonably dangerous; the game places an emphasis on avoiding monsters when possible, fighting as a last resort.  But that’s part of what makes the games work, as well, that sense that you’re forever on the razor’s edge and fighting carries considerable risk even when you do have enough ammunition.  Removing combat and roaming monsters a la a straight adventure game would remove that sense of gameplay tension, the very real worry that you could be ambushed and wind up getting torn apart before you know it.

So many of the things that made survival horror fall out of favor – bad camera angles, weak combat, dodgy puzzles, and so forth – are the things that make Silent Hill work.  But it’s hard to sell someone on a genre that’s largely been overmined, which is why the side-scrolling platformer isn’t really a happening thing at this point.

Even if you ignore the fact that we know a lot about how Silent Hill works now and all of that, the fact is that it’s harder to take the setting seriously now.  Because we know this town.

Slasher films have this problem, too.  The first time you face a given killer slashing up some teenagers, it’s at least mildly scary.  The seventh time, you’re resorting to one-off sight gags and puns to keep people entertained, because everyone knows the killer’s schtick.  It’s hard to maintain a sense of genuine horror when the whole thing is so played out that people are pretty much counting down the time until something happens.

Silent Hill, sadly, is kind of in this same trap.  Here we are in Silent Hill again, where are the nurses?  Are we in the dark world yet?  Hey, didn’t Legend of Zelda do that, too?  The jokes practically write themselves, and they’re not terribly interesting besides.  Which is understandable when you’ve been exploring the same grounds for several games, when you’ve explored the underpinnings, and so forth.

Add to that a series of crappy spin-off comics and two utterly lackluster movies and it’s obvious that the franchise just doesn’t have the legs that it used to.  At this point, the only refuge it could have left is a parody of itself, filled with nurses pulling off ridiculous sight gags, pratfalls, and campy dark comedy while people get consumed by the town in a steady diet of failed would-be escapes, which…

Wait, that would be sort of awesome.  Why isn’t anyone making it?