Giving the player ultimate control over the curve has both benefits and drawbacks, starting with the fact that players have the right to just opt out of much challenge there.

One of my favorite things to say about a game is that it has a difficulty curve bordering on a flat line.  It’s a remarkably elegant way of pointing out that a game doesn’t really change its difficulty over time, that if you can clear the first level without too much trouble the next dozen won’t give you much more or less challenge.  It’s not necessarily something that you want to be the case with a game, but it does happen.

It also presupposes that difficulty in most games is at least roughly a curve, but it can really be in lots of different shapes.  If you want to get super technical, the shape can even vary from player to player, but that’s not the road I want to walk down today.  No, today I want to take a look at how it works when you start tracking the challenge of a game over time, how the ebb and flow affects the game as a whole.  Sure, we’ve played games where the curve resembles a flat line (or a vertical one), but even the idea of a difficulty curve means that there’s a different rate of change over time.

The stages are chosen, yes, but they’re pegged at a certain level just the same.

A game is generally meant to get harder over time.  The last column I wrote in this feature discussed the idea that you could break a game down into one challenge at the end that the rest of the game was just leading up to, hence why the game steadily gets harder over time.  But that’s only a curve in the most geometric definition.  A game starting at 0% challenge and moving to 100% with direct correlation to the progress through the game has a pretty even slope.

Most games don’t do that; they have at least one turn at some point.  Either the game starts getting harder faster, or it spikes fairly early and then stays fairly steady.

The Mega Man games, especially Mega Man 2, throw you right into the mix.  You pick out one of eight stages, and by and large they’re meant to be equally difficult.  Once you’ve cleared all of them, you open up the fortress… and that’s when things start getting real.  Suddenly you can’t fall back on brute-forcing your way through a stage or just derping around, you’re playing for keeps now.  So the difficulty starts out fairly flat, then starts curving sharply upward.

By contrast, most of the Darius games get harder pretty quickly, then either start tapering off by the halfway mark or you just outright lose.  By the time you’re halfway through the game, either you have enough powerups that you can weather most attacks, or you’ve died too often and you’re going to eat it.  So it’s a sharper incline, followed by a fairly steady experience to the end of the game.

And that’s not even the limit to how the curve can be shaped.  A lot of RPGs start out as a cakewalk, curve upward, then curve back down.  Once you reach a certain point in terms of resources, you’re no longer struggling through individual battles.  It’s in the middle when it gets the hardest, when enemies frequently outpace your capabilities just a little bit.  Persona 4‘s hardest bosses occur before you fill out your party; once you manage that, you have quite a bit of game left to go, but you also generally have the tools to deal with the rest of what the game can throw at you.

Considering that almost every game is also more than capable of having difficulty spikes here and there, the curve of a given game is anything but straightforward, in other words.  Talking about difficulty curves in anything but the broadest sense makes that clear.

I mentioned Mega Man 2 above, but I left out the game’s hardest stage… or its easiest.  Quick Man’s stage has a lengthy section filled with lasers racing out to kill the player.  It’s hard to navigate… unless you have the Time Stop weapon, which allows you to simply freeze the lasers and drop down without a problem.  It can map as either easy or hard depending on your capabilities when you go in.  From a curve standpoint, it’s at once a peak of difficulty as well as a valley.

All of that is only visible if you start getting in particularly close, however.  From a distance, the peaks and valleys even out, and you’re left with an overall progression.  But all of this does leave the question of why.  Why do we need curves in the first place? 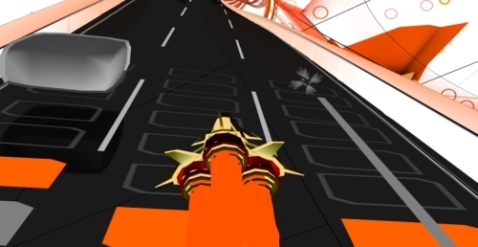 The obvious answer is that on some occasions you really don’t need a curve.

Obviously, the earliest parts of the game are where you start learning how to play the game properly, so starting out gentle is important.  But the other sorts of curve are important too.  A game that spikes in difficulty after the earliest tutorials and then slowly becomes easier over time leaves you feeling as if the rest of the game is harder.  Even if the later parts of the game become easier, you tend to think of it as you understanding the game better and playing smarter, although it might be more a matter of the game getting easier as your power grows faster than the enemies.  A game that starts easy and only starts curving upward more sharply when you near the end gives you the impression that the stakes have suddenly gotten higher, adding to narrative tension by adding the personal tension of suddenly fighting a much harder game.

A straight slope lacks that feeling of the game’s challenge corresponding with the narrative.  And sometimes it still doesn’t, but when handled properly, that ebb and flow of challenge ties into how you feel the story is progressing.  As you enter the enemy strongholds, things are significantly harder than when you were just faffing about far away.  Levels that are easier to blow through feel like a respite or the rewards of skill, even if the levels might just be straight-up easy.

Difficulty curves also stand in for progression in games where it doesn’t really exist.  By the end of your average Final Fantasy game you’re wielding the power of the gods, so you definitely feel the difference from being level 1 and plinking away with basic attacks.  But the end of Super Mario World sees you with access to the same power-ups you had at the start of the game.  By making the last world that much harder, you feel as if you’ve moved up in the world without introducing eleventh-hour gameplay updates.  It’s another case of the curve serving the narrative, even if it’s just the self-created narrative of beating a game.

Every game has a point where it hits the apex of its challenge.  Where that falls compared to the rest of the game winds up saying a lot about how the game is trying to make you feel from start to finish.

Next time around, I’m going to talk about the elements that make for an easier or harder game on a whole.  After that, let’s talk a little more about first-level hells and other places where the difficulty curves go wonky.