Challenge Accepted: I earned it 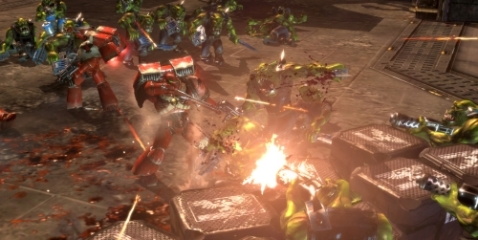 I have the tools to kill all of these orks, so I will kill them and get their stuff, because that is how this works.

In real life, overcoming challenges sometimes leads to rewards.  Emphasis on “sometimes.”  Sometimes overcoming challenges just means you’ve overcome a challenge.  You climbed to the top of the hill, and your reward is seeing the other twelve hills ahead of you while you climb down this one.  Or you climbed halfway up the hill when a falcon randomly deposited a sack full of money at your feet.  How hard you work has some connection to success in real life, but it is not a perfect correlation by any means.

Games are not dissimilar.  The notion is hardwired into gaming that a challenge equals a reward so long as the challenge was not completely self-inflicted (playing Metal Gear Solid one-handed is definitely going to be a challenge, but the game isn’t going to reward you for your determined efforts to make it harder).  Yet there are challenges with rewards that seem either far too big or too small for the effort put in, because it turns out that properly balancing a challenge and a reward is really difficult.

Part of why I dislike the game mechanic of starting you with all of the game’s toys and then stripping them away after the opening sequence is because instead of earning your way up, you feel as if you’re earning your way back to where you started; it feels less like a reward and more like the removal of a handicap.

First of all, there’s the simple fact that sometimes the challenge is the reward.  Beating Mass Effect on Insanity from start to finish is a task you only take one when you want a steep challenge, and the reward for doing so is that steep challenge.  You could, in fact, argue that this is the proper reward for every challenge, that taking on a challenge should be wholly voluntary and should be its own reward.

But that’s nonsense, isn’t it?  After all, taking that to its logical extension sees you playing games in which you more or less run roughshod over everything in games that you cannot fail, with the only challenges being ones that you choose to put there.  Obviously there’s some baseline level of challenge beneath which you shouldn’t get a reward, or at least not the full reward.  “Games” like You Have to Burn the Rope are based entirely around the gag that when you’re given a huge reward for no actual effort, it doesn’t feel like much of a reward.

At the most basic level, we recognize and agree that you should have to do something in order to get rewarded.  A game should not just be a matter of walking in a straight line and pressing a button until it dispenses a pellet, since that’s a pure Skinner box.  Debates about the cutoff point for that are a running concern, but we all know on some level that it’s not enough to just be present.

The question, then, isn’t whether or not something should be held back for better players who can overcome challenges, but what.  The most simple solution was typically to hide the game’s “real” ending from the easiest difficulties; there are plenty of games that show you a truncated ending or just cut off abruptly if you’re not playing at least on the normal mode.  This works, but it doesn’t make the harder difficulties feel like a reward so much as it makes the easy mode feel like a punishment.

Somewhat atypically, Devil May Cry inverted this system in its first installment.  The only way to unlock the Easy mode was to die a certain number of times, at which point the game would offer to let you turn down the challenge.

Many games have gone with offering actual gameplay rewards for clearing challenging content, like the powerful materia awarded to players who beat Final Fantasy VII‘s extra Weapons.  The problem there, of course, is that in order to beat those bosses you have to be good enough to do so without those rewards.  In order to get the prize, you first must prove that you don’t need it at all.  That just sounds backward.

The flip side, of course, is that you create a scenario wherein looking how you want is inherently tied to your progression through tedium, which is not quite the motivator you might expect.

MMOs handle the problem differently – most of the challenges aren’t terribly, well, challenging, but the amount of time necessary to coordinate people and then work your way to the reward ensure that you keep going up against the same wall week after week.  The best rewards go to the people most willing to endure tedium and try again.  This is, thankfully, changing, but it’s one of the ways that the genre has attracted a (not wholly undeserved) reputation of being an unending timesink.

Recently, several games have opted instead to emphasize cosmetic options or special play modes for players who overcome challenges.  Kirby’s Adventure was the first game that introduced the concept to me, at least; clearing the game unlocked its hard mode, clearing the hard mode unlocked the sound test, and so on.  The problem, of course, is that eventually you run out of extra modes in the game, and it’s most likely that these extra modes don’t really offer any additional rewards for players who make it through.  I’ve unlocked “Extreme” modes and the like for games which offer nothing additional, and in some cases those games were hard enough on, well, Hard; playing through again for no additional benefit doesn’t sound appealing.

There’s also the fact that playing through to unlock another way to play isn’t exactly a reward so much as it’s the promise of a reward.  I didn’t unlock anything upon beating Final Fantasy X, but I’ve played it multiple times because I had fun doing so.  I could not, however, be arsed to play through Metal Gear Solid 3 a second time, even with all of the toys that I unlocked after the first go-round.

There’s no way to objectively rate a game’s overall challenge and find out that it contains exactly 2.7 Maxwells of challenge (in this example it is assumed that a Maxwell is a unit for measuring challenges), the generals consensus among developers seems to be that the main game’s story and content should be available to players who can overcome the main thrust of the game.  Unfortunately, that means that greater challenges are forever scrabbling for suitable rewards to give players, something that makes that extra time and effort feel like a worthwhile investment.

Not the alternative of making the game nigh-impossible to beat without perfect reflexes is an improvement.

Next time around, I’m going to start talking about a specific simple and nearly universal game and the challenges it presents – Tetris.  As I’m into the second year of talking about this, I think it’s past time to mix up the format a little.  The week after that is a bit more up in the air – I might continue my analysis, or I might move on to write about a different game and what it presents.  We’ll just have to see.