Having a million more ways to interact with people online than we had back in 1997 has meant that people have gotten creative.  Very creative, at times.  Instead of just doing all of your roleplaying via the game now, you can have in-character journals, Twitter accounts, Tumblr accounts, and so on.  Even I’ve gotten in on the fun; as I’ve mentioned in the past, I’m running an in-character Twitter account for my shaman over in World of Warcraft, largely because the roleplaying communities on my servers have mostly dried up.

The question, of course, is whether or not it’s worth it.

Let’s be clear here: writing stuff in-character is not roleplaying by the strictest definition.  You’re not interacting with anyone, which makes it more akin to just writing straight fiction.  This isn’t an inherently bad thing, it just means that you can’t really judge what you’re doing by the same standards.  And if you do intend to be roleplaying with people outside of those formats, you basically can’t include any long-term character development in those posts without making them required reading.

Do you really want to start roleplaying with someone just to get a reading list to fill you in on what happened since your characters last spoke?  I tend to doubt it.

Thus, these exercises are mostly just that.  They’re introspective glances, a chance to dig further into what’s going on within your character’s head, even as your character is fundamentally not moving forward.  Which is a good and a bad thing, too; it means that you get more space to examine your character and who they are, but it also means that you’re making the whole thing public largely as an exercise in showing your work.  Everyone knows you’re doing good work, because they can read it. 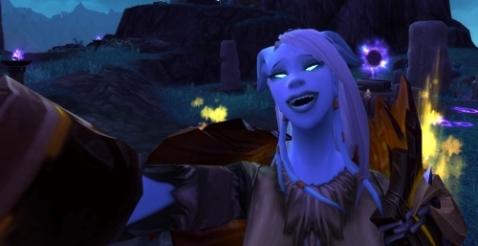 On the bright side, it can allow you to throw some shade that would be otherwise impossible to put into action.

In very few situations can other characters technically see what your character is writing.  No, I’m not talking about obvious stuff like the fact that Twitter doesn’t actually exist in World of Warcraft; assuming you use the most obvious conceit, these are private confessions, personal documents, things written but hidden away from where others could see.  Sure, other players will read them, but their characters won’t know what the player read.

Not that this makes them useless, of course.  It just makes them specialized tools.  Treating them as a substitute for actual in-character RP isn’t going to work, and thus you probably shouldn’t beat yourself up over it if you’re not on board.

So that’s enough about the drawbacks.  Let’s talk about the positives, starting with an obvious one.  Even if you can’t use in-character journals to communicate IC information, you can use them as a very effective and fast way to communicate OOC information to people who want to know it.

One of the things that’s sometimes hard to get a gauge on or even talk about in roleplaying is where the players actually want to take the story that’s unfolding.  One player wants an actual romance, the other wants a doomed one.  One of them thinks the characters are growing close, the other sees lines being drawn.  An IC journal doesn’t mean that the other character will know what’s going on, but it does mean that the other player will have a rough idea of your plans and will have more space to respond to those plans, positively or negatively.

Admittedly, sometimes it can be totally acceptable to have something accessed in-character.

They’re also a great way to fill out character backstory and downtime.  It’s not possible or reasonable for your character’s every waking moment to be roleplayed as it’s happening, but adding in elements to an IC journal fleshes out the portrait that people have of your character.  There’s also more possibilities included for future roleplaying, establishing that your character has certain routines and places that she could be found without specifically looking for her.

All of that isn’t to disregard the importance of character introspection, either.  I tend to roleplay at least a bit off the cuff, basing my characters actions in no small part off of what seems appropriate at the time, understanding the reasoning behind those actions later on.  Having a place to publicly analyze all of that can help your understanding as well as making the character clearer for others, even if the player can’t bring that information to their character.

In short – these things are useful.  They’re important.  But it’s dangerous, almost unpleasantly so, to treat them as any sort of substitute for actual roleplaying.  They’re useful for fleshing out your character, getting practice, understanding what motivated your character.  Yet you shouldn’t put the same degree of effort into making sure that new journal entries happen, simply because there’s no actual roleplaying taking place there.  It’s too limiting, too small, and doesn’t offer the opportunity to interact with others.

If you’re putting more effort into writing up journal entries than actually roleplaying, what you really want to do is write a novel.  Which is totally cool and great; just be honest with yourself about what you’re doing and direct your energies.

Next week, I want to talk about sexuality and the best ways to make it a part of roleplaying (which I support) without being gross, unpleasant, or otherwise untoward (which I do not support).  The week after that, it’s time for a look at differentiating character tastes from your own, even though it’s trickier than it sounds.